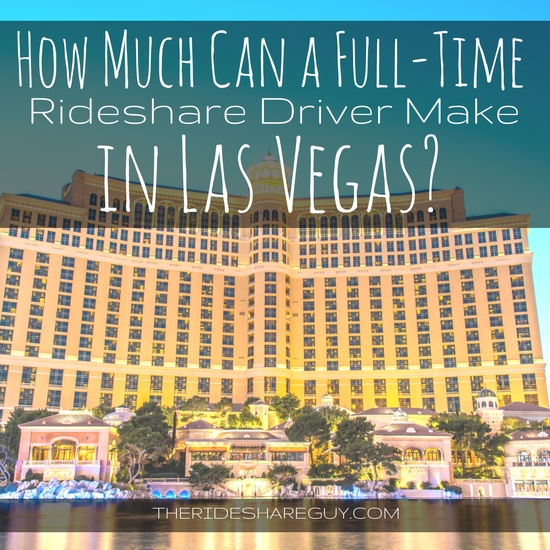 How Much Can a Full-Time Rideshare Driver Make in Las Vegas?

Harry here.  A lot of people get into rideshare looking to make a few hundred bucks a week, which is great.  But unlike other jobs, there is a lot of variability with this line of work and the top drivers can make significantly more than the bottom.  Today, RSG contributor (and spreadsheet master) Bill Tesauro examines what a top driver in the Las Vegas market can make.  And believe it or not, this Vegas driver actually makes most of his money with Lyft, not Uber.

Recently RSG reader Mike M reached out to us about his experience as a full time rideshare driver in Las Vegas, NV.  Today we’d like to share his story with you alongside how his average net earnings topped $1,056 a week over 44 weeks!  That’s a total of $46,464.

Mike first became interested in Uber & Lyft about 2 years ago as a secondary income stream alongside his full time cubicle gig and night job slinging bags at McCarran Airport.  But the taxi authority stepped in near the end of 2014 to shut it down.  Luckily, September 2015 rolled around and rideshare was legally back!

Driving a Nissa Xterra on Friday and Saturday nights, Mike joined a legion of weekend warriors hitting the pavement to shuttle tourists around Sin City.  Towards the end of NOV 2015, he bought a Hyundai Santa Fe upgrading to both UberX / UberXL / UberSelect (mo’ $$$, mo’ problems).

Looking back into fare cuts, we can see that Las Vegas earnings have been decimated over the last year.  Rates started at $0.30 per minute and $1.85 per mile with base fare of $4.00 (think about the tourism effect and marquee events weekly combining for surges almost every day of the week, it was a modern day gold rush).  But reliable cuts progressed like clockwork every 3 to 4 months to the tune of 60%-80% across the board.  As they stand today, UberX rates are damn cheap at $0.15 per minute and $0.90 per mile, but the minimum fare remains $6.70 (the only bright spot).

Once again, Mike learned that as the industry shifts around him outside of his control, it’s time to leverage tertiary sources.  Being the top US destination for bachelor/bachelorette parties, strip clubs play a huge role as highly suggestive locales.  Rideshare drivers know this and the club managers know this, so goes the black market pay to play kickback schemes!

Got a car full of passengers about to indulge in a night they’d prefer to forget? Why not drop them off to empty their wallet at the club paying you the most to funnel them accordingly?  Mike raked in an estimated $5K over 8 months and, more formal than originally thought, they do issue payment receipts (looks like they want those taxable business expense deductions for advertising/promotions too).  And in a city filled with gambling galore, lots of people carry cash, so it’s actually more common to receive tips here than other cities.  Mike was averaging $100-$200 per week in tips, and that went up after he upgraded his whip, adding various gadget chargers, scrolling LED signage, and subtle interior lighting.

Related article: make hundreds of extra dollars promoting this app to your passengers Lots of cool lighting and toys for pax.

Mike expanded his reach outside of normal in-app fare requests too by accepting on-demand requests from repeat customers (NOT illegal “street hails” as undercover LVMPD transit cops issue $2.5K fines plus impound fees).  While this subversion is frowned upon by both Uber & Lyft, their bonus incentive programs flood the streets full of “driver inventory” killing demand across the city, so survival mode activates for full time drivers.  For Mike, the max pre-arranged fare accepted must cross the $40 mark (after Uber’s 20% cut) on UberXL/UberSelect to be worth his time (no UberX).

Circling back to driving pax to strip clubs, most clubs are open beyond 2 AM, and more well known signature clubs stay open 24 hours a day.  These girls want discretion beyond what can normally be provided (as they may partake in a little moonlighting of their own…) but don’t want to break the bank either.  So they enlist reliable “concierge” services of a trusted few UberX drivers to chauffeur them to/from work at ungodly hours.

How to Increase Profits in Vegas

Mike’s number one strategy is to stay away from the biggest events!  This advice (to any Uber/Lyft driver) seems counter-intuitive but it makes sense.  Las Vegas (if you’ve never been) keeps its patrons as safe and cordoned off as possible from the street to funnel them into various casinos / restaurants / shopping malls / hotels to empty their cash.  Organized chaos seems fitting and to keep everyone lined up (same as with taxi/cab stands), event planners stage pickup areas similar to airport FIFO queues but without regard for drivers waiting (bigger fares, wasted time).

His second best suggested money maker (since Las Vegas, similar to NYC, is open 24/7) is driving between 2 AM to before sunrise weekdays/weekends as the streets are empty… quicker paths to pickups, no traffic!  Also, hit the pavement after noon too as it greatly reduces airport dropoffs from the strip (trips to LAS require the most work for the least $$$ as loading/unloading a family of 4 plus bags @ $0.15 per minute kills profitability).

To fully take advantage of the Lyft power driver 10%-20% bonus, you need lots of short rides.  Mike will drive along Las Vegas Blvd (“the strip”) grabbing easy rides if either the 15 (N/S) or 515 (E/W) highways are jammed.  Another definitive sweet spot is along Fremont Street, which on average nets between $15-$25 per ride on UberXL (groups > 4 peeps heading either downtown or to “the strip”). Leveraging the GPS location based functionality of the app (meaning closest driver snags the fare at any given point), Mike “skims the strip” staying within center lanes using the UberX drivers closest to the curb as a buffer shield (they grab the cheaper fares 1st freeing him up to snag UberXL/UberSelect ONLY).  To put it simply, Mike drives straight down the middle of either Las Vegas Blvd or Fremont Street upping his chances at snagging an UberXL fare since the UberX drivers hover along the right hand lane curb (ingenious)!

Lately he’s learned to squeeze over $2,500 from the last week of July 2016.  To achieve such tremendous totals, Lyft accounts for 93% of “reported” earnings due to the 20% power driver bonus plus tips. That’s about 80 hours at $25 per hour plus $100 in tips and $400 in 20% power driver bonus!  As you can gather, hustle and luck meet at the intersection of opportunity as Mike never misses a chance to grab just a little more cash.  When out driving a double work week, he’s always handing out rider referral cards as well.

In large parties of 6 passengers, the likelihood increases that someone/anyone may still not have an Uber ($5 per new user) / Lyft ($10 per new user) rider account.

Omitting cash kickbacks from strip club referrals, Lyft has become his major focus due to unlocking its potential as a full time driver.  Comparative analysis aside, Lyft empirically pays better the longer you drive.  Of his almost 44 weeks of driving over 2015/2016, his top 5 behind that ranged between $1.7K to $2.6K averaging 79% Lyft $$$’s.  Obviously Lyft is dominating the Vegas landscape (as opposed to my hometown San Diego where Uber kills it about 3 to 1). Lyft netted Mike about $29K versus Uber’s $17.4K, a 60% profitability variance that can’t be argued against.  And when driving for Uber (which cannot be avoided as platform demand follows a plotted sine wave of peaks & valleys), he’s literally working harder for less $$$. You can see here from the data that Mike not only makes more with Lyft but also has a significantly higher per hour average with Lyft.

Click here to see a full spreadsheet of Mike’s week by week earnings.

Delving into the psyche of potential Uber/Lyft customers, Mike employs a basic acronym to 99% of pickups… SCGG (strippers / clubs / guns / golf).  Knowing your city pays off and (again) being highly suggestive to an unprepared tourist populace.  Guys/Gals heading to Sin City for regrettable nights are appreciative of knowledgeable drivers as unlimited options abound.  Debaucherous tendencies are predictable as ever, especially within the confines of an adult playground.

As a full time driver working 10 hour shifts 7 days per week, when does Mike have time to eat?  For starters, he skips the energy drinks and coffee that most of us thrive on (quick shout out to Starbucks). Instead he drinks green tea extract & lots of water plus prepping smaller grab-n-go meals of pure protein (raw almonds / hard boiled eggs) to keep focus.  Topping out around 30K miles logged already in 2016 with 4 months left, Mike’s been eating through his car at a depreciation rate of about 3.8K miles per month.  And what is Mike’s ends to justify his means?  Just like the rest of us, he’s indebted to the tune of about $10G on credit cards (but paying it off quickly) and his business plan to buy a 2nd home for AirBnB while driving Uber/Lyft full time has positive cash flow written all over it.

Readers, what do you think of this strategy driving in Vegas, and do you have a hometown strategy you’d like to share?

Shared Rides Are Back – But Uber Has Made Some Changes!

Uber and GetUpside Team Up to Help Drivers