Are Drivers Allowed to Advertise on Their Cars? SFO Says No!

Here at RSG, we’re firmly on the side of drivers getting paid, however they choose to do it. Whether it’s by suggesting passengers visit a family bakery (like reader Kyle does), putting a mobile vending machine in their car (with Cargo), or wrapping their car in advertising, if it makes drivers more money, we’re for it (the legal stuff, that is!). Senior RSG contributor Jay Cradeur, however, recently found out this might not be okay with local authorities. Here’s what drivers need to know.

Recently we were contacted by loyal Rideshare Guy reader and driver Greg (not his real name) who told us that he received a citation from the SFO Airport Commission.  Did you know that we, the drivers, are prohibited from using our cars to advertise while driving on San Francisco Airport (SFO) property? In fact, no advertising is allowed.

If you did not know this, you’re not alone.  In this article, we will delve into this recent development and see if we can make sense of an unusual and contradictory situation.

Background on Advertising with Your Car

The are many forms of advertising that you or I may see at the airport.  Greg works with a company called Carvertise and they do the “car wrap” type of advertising.  Greg told me he makes an extra $100 – $200 per month on average just by adding the wrap to his car.   That’s a nice little bit of extra income! There is another company called Firefly that will pay you to put digital advertisements on your roof: And then there are the advertisements that we see on top of most taxi cabs: With all this advertising being driven around the San Francisco airport, one would think advertising is A-OK.  Therefore, it makes you wonder what it was about Greg’s car advertising that earned him a citation: An example of the advertising on Greg’s car

When you get a citation at SFO, it is sent directly to Lyft and Lyft responded by sending an email to Greg in which they graciously paid for his citation – kudos to Lyft!

We are never told the amount but here is the beginning of the email: 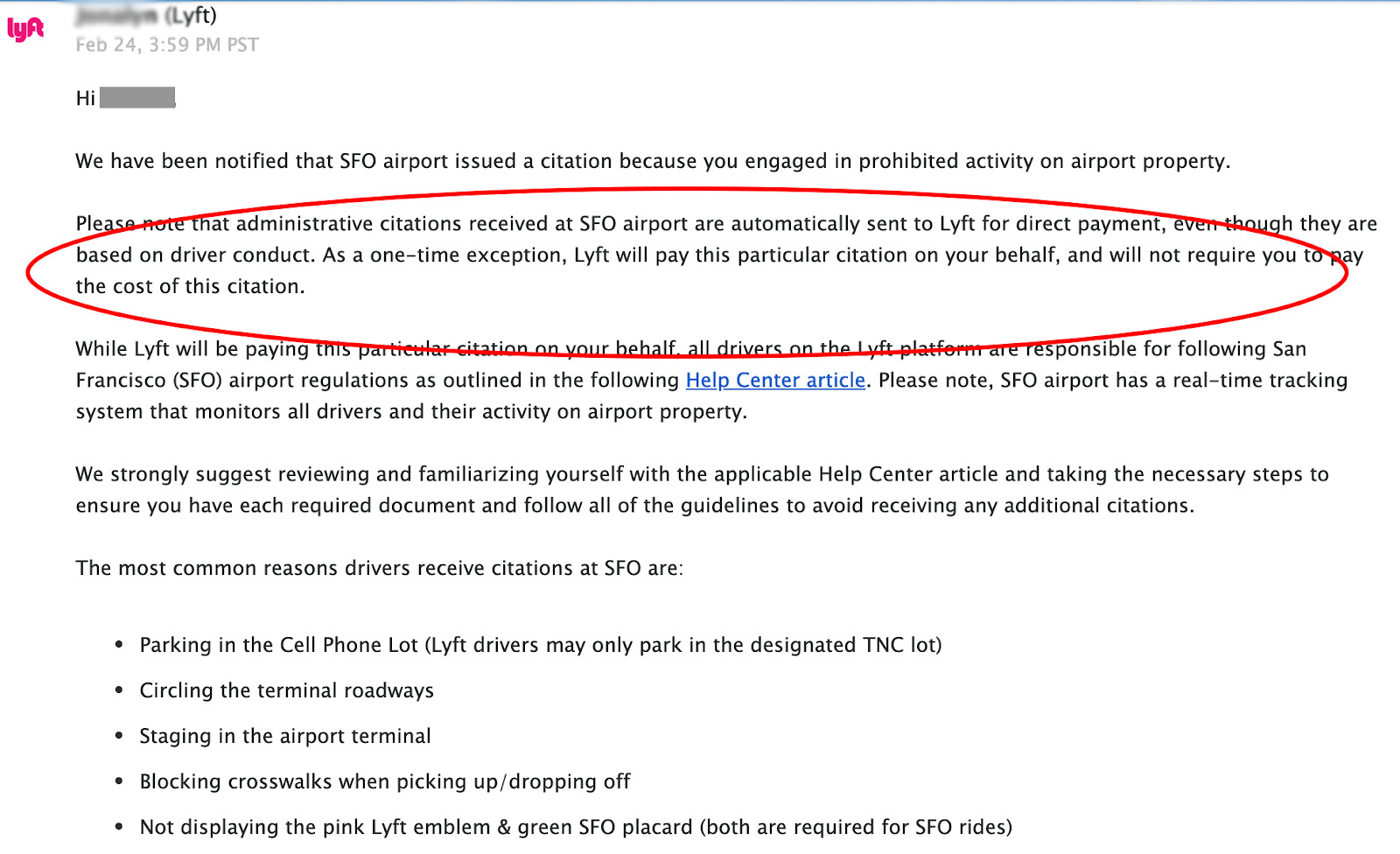 Lyft paid for this first citation – how much? No one knows.

The Citation for Car Advertising at SFO

Included with the email was an image of the citation:

The regulation cited is not on the citation form.  The yellow vest (those folks who direct traffic and look for infractions) hand wrote the citation listing.  It is specified as:

And under comments, we see:

What Are The Rules Around Advertising at SFO?

I did a bit of research and found the regulations for the San Francisco International Airport.  Here are the two sections I could find which clearly prohibit advertising on SFO property:

(I)   Promoting, advertising, or soliciting sales or business for any commercial enterprise, including but not limited to distributing free product samples or other promotional materials.

(J)   Placing signs, notices, posters, advertisements or other writing in, on or around Airport property, including but not limited to the interior or exterior of any terminal building, administration building or parking structure, or any roadway, utility or other infrastructure.

What Do Other Airports Say?

We looked at a few other airports and found one with similar regulations.  Here is what Los Angeles Airport prohibits:

3.2.1 No person shall post, distribute, or display signs, circulars (printed or written matter) of an advertising nature at the Airport without written approval of the General Manager or designee.

We looked for similar prohibitions at Chicago’s O’Hare airport and New York’s JFK airport but could not find anything comparable to SFO and LAX.

Should Drivers Who Drop Off/Pick Up at Airports Be Worried?

On one hand, we all know there is a tremendous number of TNC cars (Uber, Lyft, and others) and taxis that have advertising.  They are everywhere.  However, there seem to be regulations that prohibit advertising.

Perhaps it is like the 55 MPH speed limit on some highways. We all know there is a speed limit. We all know we drive at 70 MPH on a regular basis. Even though it is technically illegal, we all do it.  And every once in a while, we see someone get a ticket.

Is that the situation here? For the most part, the yellow vests turn a blind eye to the advertising? We don’t know. What we do know is that many people are doing it but only our reader and driver Greg has received a citation, opening up a whole can of worms.

What Does Lyft Say?

Lyft has told Greg that they are looking into it.  He was told his case has been “escalated.”  We believe this citation is the first of its kind.  Clearly, if advertising were to become a citationable offense, this would cause big problems for taxi drivers and TNC drivers who have advertisements on or around their car.

In our article on Rideshare Car Advertising, Christian Perea answered the question about the legality of advertising:

Since we are all independent contractors, Uber or Lyft have very little direct control over how we decorate or customize our vehicles. In the early days of rideshare, a few drivers DID get deactivated for placing ads on the exterior of their car but this stopped once lawsuits around the classification of drivers as employees vs. contractors intensified and Uber/Lyft realized that directing your “contractors” to not do this would look really bad in court.

In fact, Uber and Lyft have even gone as far as purchasing ads from the companies listed below to display their own branding on these cars:

You can run into some trouble though with local authorities (particularly airports) for displaying ads on the exterior of your car. So make sure to check your local laws and regulations.

What Does Carvertise Say?

Carvertise has also told Greg that they too are looking into it.  This is a significant issue for advertising companies with the potential to seriously derail their business model.  If those folks in the yellow vests at SFO suddenly start to write up tickets to generate more revenue, this won’t be good for Carvertise and Firefly and the other advertising companies.

Time will tell.  This story has a long way to go before it is over.  It appears Greg may have just been unlucky.   Or is Greg’s story a sign of things to come.  It could be that airports see an opportunity to profit from the rideshare industry by essentially taxing drivers in the form of increased citations.  I hope that is not the case, but it is hard to argue against the profit motive and good old greed!

We will keep you posted.  If you are a driver who is advertising, let us know if you have had any similar experiences.  This is the first we have heard of it and it is frankly very surprising given the tremendous volume of advertising that we see at the airport.  If you have been thinking about using your car as an advertising vehicle, you might want to wait and see how this whole issue shakes out.  We will keep you updated.

Thank you, Greg, for sharing your story!  As a thanks for Greg’s tip, we’ll be sending him a $100 Amazon Gift Card.  If you’ve got a tip for us, e-mail us at harry@therideshareguy.com and if we write about it, we’ll send you a gift card too!

Be safe out there.

Drivers, have you noticed more or new restrictions/fines at your local airport? Use the Mystro App to Drive Easier and Make More Money