How Much Does Shipt Pay? Is It Worth Driving For Shipt in 2021?

Ever wonder how much Shipt shoppers get paid? In this post, Shipt Shopper Jonathan shares his Shipt pay and earnings, strategies for maximizing your income while delivering, and helpful tips for passing your Shipt shopper interview.

I’ve been testing different gig companies for almost a year now. I started with Lyft, Uber and Amazon Flex. I even tried moving with the Dolly app! More recently I began delivering food with Doordash, Grubhub, Postmates and Uber Eats.

During the Covid pandemic I decided to switch things up again, adding shopping apps to the list. I started shopping on Instacart, and quickly realized that I needed to also be on the Shipt app. Almost immediately I felt like the platform gave me a lot of control over how I was shopping.

For those of you that aren’t familiar with Shipt, it’s a shopping app. Similar to Instacart, you get paid to shop for customers (usually groceries) and then deliver the order to their house/apartment.

The Shipt app makes all of this easy, showing you exactly what items to buy and routing you to the delivery address.

Shipt was acquired by Target in 2017, so a lot of shopping will take place at Target stores, but there’s also a lot of other store to choose from. They’ve also partnered with a number of other grocery chains, which adds some variation to the shopping experience.

When you use this link, you’ll also get a referral bonus after you complete a certain number of orders.

How Much Does Shipt Pay?

On average, orders in the Seattle area (where I live) are about $10-$12 per order. Payout is shown before the tip, in my experience tips average $3 to $5 per order. Occasionally the tip will come in much higher than expected!

Shipt is currently paying a $2.50 premium pay in Seattle due to the Covid-19 pandemic. This isn’t the case in all cities, and it’s honestly difficult to tell if this actually boosts pay at the end of the day.

How Much Do Shipt Shoppers Make Per Order

Pro-tip: When selecting orders, I always check the “promo pay” section for higher paying orders first. These orders often pay in the $20-$30 range!

Usually I only accept a promo pay order if it’s within a few miles from my house. Often I will see higher paying orders that are 20-30 miles away, and we all know that as independent contractors our gas expenses can quickly eat into the pay of far away orders. 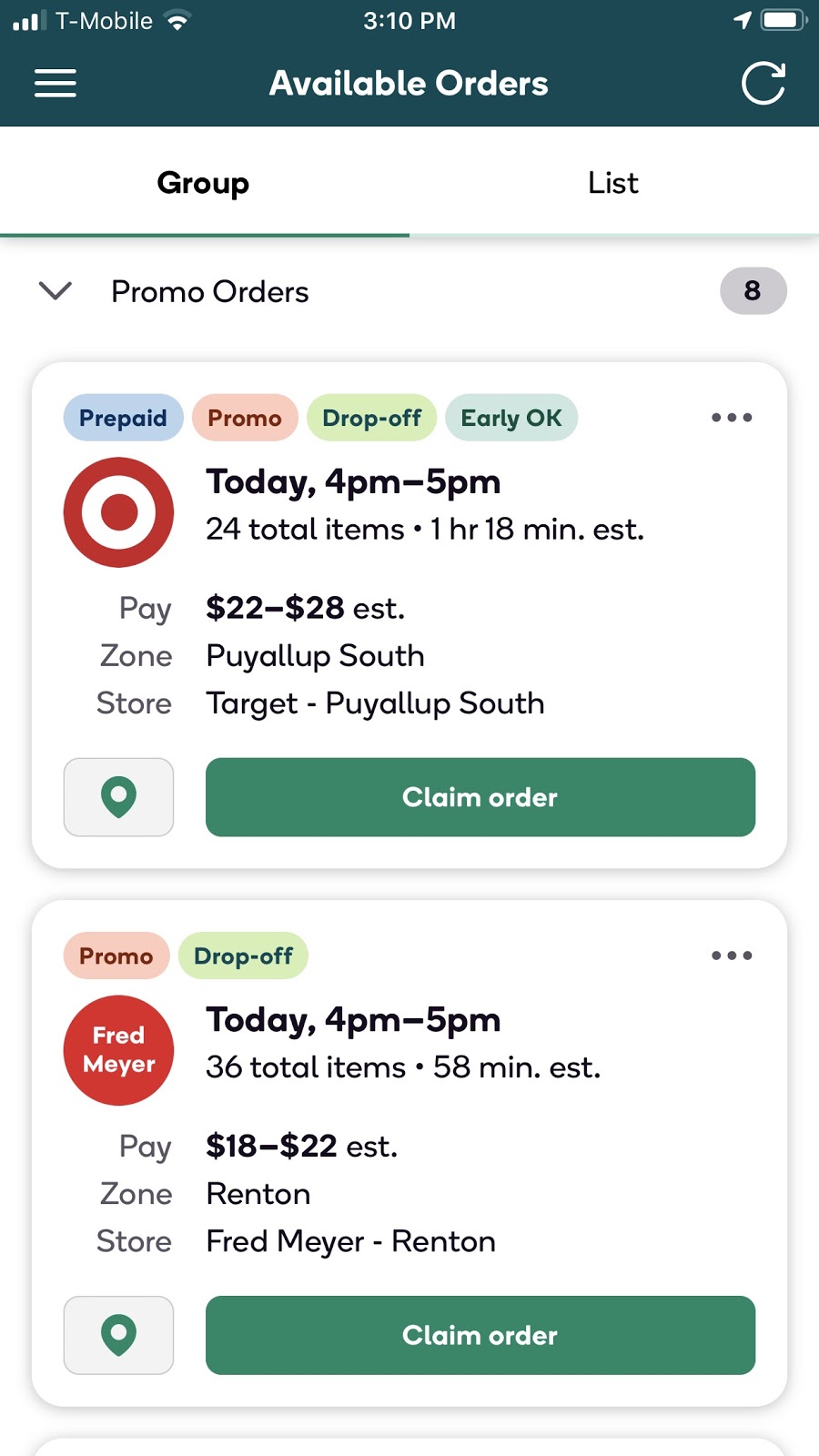 How Much Do Shipt Shoppers Make Per Hour

From start to finish, a Shipt order usually takes me about an hour. I’m still a bit of a beginner, so I expect to get faster over time.

That means that my average hourly pay is about the same as the average pay per order at $15-$17.

Seattle is a high demand area, with a lot of customers using the Shipt platform. This makes it easy to schedule out plenty of hours with a reasonable expectation that I’ll stay busy.

On that note, I’m not sure if this can be a full time gig in smaller cities that may not have the higher demand. I usually recommend adding other gig apps to your arsenal to keep you busy during downtime, like Instacart, Doordash, Postmates and Uber Eats.

This means that experienced shoppers can potentially double their earnings if they know what they’re doing.

I’ve also been told that Shipt rewards its veteran shoppers with access to higher paying orders. As a new shopper, I can’t quite confirm this. It’s definitely good to hear, as not all gig platforms seem to respect veteran independent contractors.

How Do Shipt Shoppers Get Paid?

Shipt pays via direct deposit. There’s a tab within your account page in the Shipt app where you can easily add your direct deposit info for payout.

How Often Does Shipt Pay Shoppers?

Shipt pays out every Friday via direct deposit. The payout will consist of earnings from the previous week (Monday through Sunday).

Get Paid To Shop

At the beginning of the Covid-19 pandemic, Instacart pay was almost unbeatable. Instacart saw a huge boost in demand and couldn’t keep up with it. This forced them to boost order pay, and customers had to leave huge tips on top of that just to get their order filled. The result, an influx of $50-$60 batches and stories of $100 earnings on a single batch!

These massive payouts didn’t last long, as Instacart quickly hired 500,000 shoppers. This allowed them to fill customer orders at lower prices and bring things back into a balance (or out of one, depending on who you ask).

For a lot of veteran Instacart shoppers, the app completely dried up of orders, making it impossible to earn a living during a time of crisis. On top of that, Instacart wasn’t prioritizing veteran shoppers. Some shoppers actually reported that it was the new hires getting priority batches.

Things have since calmed down and Instacart pay has normalized. My average batch on the Instacart platform is between $15 and $20, although there is a very wide range of payouts. I see plenty of $9 batches (tip included) and some higher paying batches between $30 and $40 (but those are double batches so it requires almost twice the work).

Instacart has a very complex pay structure that includes pay per item, pay per mileage, base pay, heavy order pay, customer tip and more. This accounts for the large fluctuation in payouts. Shipt, on the other hand, keeps their pay more consistent and the pay is a bit more predictable. The calculations are a bit more straightforward (at least they used to be). At the end of the day it is similar to Instacart, as I average $15 to $17 per order with Shipt.

How is Shipt Pay Calculated?

Shipt’s pay scale is very simple: $5 per order plus 7.5% of total customer pay. This is now referred to as V1 for Shipt pay.

As mentioned earlier, Shipt appears to be testing a V2 of pay in many cities. Under this new pay structure there is a base pay of $5 per order plus an unspecified additional amount that is supposedly based on miles driven and total items.

A lot of veteran Shoppers are not happy about the new pay model. They claim that it pays less than V1 pay and they are disappointed in the lack of transparency.

Lack of transparency in pay is definitely an issue in the gig economy, it allows gig companies to make changes to worker pay without letting them know about the updates. There has been suspicion that V2 pay was created to offset the new “premium pay” introduced by some larger metro areas to help workers during the pandemic.

Despite the outcry about the new pay model, I still think Shipt is a good app for generating income and I plan to continue shopping on the app. There are usually orders available in my region, which makes it a reliable source for side income.

In addition, I like that Shipt lets you create your own batches by combining orders – I can definitely see this being an income booster.

The one obstacle for most new applicants is the interview process. It’s a requirement when you apply, and it can be a bit intimidating. Potential shoppers must record a video of themselves answering three questions (mostly related to customer service and professional qualifications).

My recommendation is to practice this a few times, watch your videos and try to make improvements before submitting. Given that I make YouTube videos about the gig economy, I think I had a slight advantage.

To be completely honest, it took me quite a while to get comfortable in front of a camera when I got started with YouTube. But after some time I got the hang of it. Practice a few times and you will do just fine!

Pros & Cons of Being a Shipt Shopper

How to Get Started as a Shipt Shopper

If you’re looking to diversify your rideshare income and continue earning money in the gig economy, Shipt is a great option to consider. Click here to get started and sign up. You also get a referral bonus when you sign up using our link.

Jonathan first started working in the gig economy in 2015 as a Lyft driver. Since then he has worked with a handful of driving, delivery, shopping, moving apps and more. He began working with Shipt in March during the Covid-19 Pandemic. He has created a website to search for gig economy jobs in your city, giglaunch.com. You can see Jonathan’s experience working different gigs on his YouTube channel, Gig Nation.