I Got Skunked by the Uber Algorithm!

By Sergio AvedianJanuary 10, 2020No Comments

Is driving for Uber and Lyft really as flexible as it seems? What happens when you’re in a high surge area and dozens of drivers around you are getting ride requests but for some reason, you’re not getting any pings?! Today, senior RSG contributor Sergio Avedian investigates what happens when you get skunked by the Uber algorithm!

Interested in improving your driving strategies? Check out these quick links below:

I’ve been driving for Uber for just about four years, and in that time I’ve seen the good, bad and ugly of driving for Uber. When I first started, you could turn on your app, drive and make money. In Los Angeles, you could expect to earn over $35-40 an hour! However, things have changed over the last four years.

During that time, I have tweaked my driving strategies to keep my hourly earnings up. Uber has recently released some new features and made some big announcements that will make me tweak my driving strategies again but the principles discussed below will remain the same. Uber might be getting rid of flat rate surge but things will always be changing and it’s important for drivers to adapt or suffer the consequences.

Is Driving for Uber Really That Flexible?

As most RSG readers know, I am a surge only/mostly driver, I have applied that method to my strategies from day one. But I had to adjust my driving hours and strategies many times over the past few years, and I discovered early on that I must drive when and where there is demand.

For me, a split shift produced the best results, 5am-10am weekday mornings, 4pm-9pm weekday afternoons and 5pm-12am weekends. Those are the most lucrative hours to drive in Los Angeles, as well as many other cities in the US if you want to make more than minimum wage after expenses.

Uber and Lyft depend on their freedom and flexibility rhetoric to recruit new drivers and battle AB5 since many (over 60% of drivers according to our Uber driver survey) quit after just six months. To a certain degree, what Uber and Lyft claim is true. I could be sitting on my couch and turn the app on and wait for a ping, but what are the odds of getting a request doing that? Unless you live in certain areas of the city, you may not get a ride request for hours.

Like many other drivers, I live in the suburbs of Los Angeles, and I have taken Uber up on their claim of flexibility and freedom to only turn my driver app off after an hour or two with no ride requests. Therefore, Uber’s claim of flexibility and freedom goes only so far. If you want to make more than $15 GROSS per hour, you have to have a strategy and work in parts of your city when the demand is outstripping the driver supply.

Driving in Los Angeles: I Got Skunked!

After my usual scheduled ride on Lyft to LAX (Los Angeles International) early Wednesday morning around 5 am, I positioned myself for the morning rush hour surge rides in Santa Monica, one of the busiest parts of town when it comes to rider requests. This area also rewards drivers with many predictable surge ride opportunities. I have been using this basic strategy for years with tons of success.

While driving there, it started to surge, but since I expected the surge would grow until 6 AM, I didn’t even bother turning my app on. Patience is important people. I kept moving to my destination, anticipating the surge to increase. As I covered in the Uber flat rate surge article, I follow the 3P’s (Patience – Position – Planning) to a tee when I decide to drive. The following screenshots are from 6 am when I decided to turn my app on and continue driving to my usual spot expecting the flat rate surge (what I call penny surge) to increase, and sure enough it did! Since I had a minimum flat rate/penny surge of $9.25 attached to my next ride, I parked and turned my engine off, as the waiting game had officially begun. I have studied the Uber algorithms and their patterns of distributing rides extensively in order to stay ahead of the game. Some may ask if it is really worth it to put this much effort into rideshare driving, but if you want to achieve $30-35 per app on hour, you have to. There’s nothing worse than just turning your app on and aimlessly driving all over town accepting every ride request!

I believe that the Uber algorithms are set up to price rides in order not to lose money but also keep the drivers fed with enough requests in order for them not to switch and drive for Lyft. It is a delicate balance that needs to be kept for millions of drivers in the country. Where I position myself in the mornings produces two types of rides, airport or shorties from passengers going to work. With a $9.25 flat rate surge, I was comfortable accepting either type.

The following screenshots are within the 6-7 am hour while I was parked. I check my passenger app frequently to see where the competition is (other drivers). Notice how many countless cars during the agonizing 45 minute wait have disappeared from the app, meaning they were all getting rides (or going offline but I doubt that). FYI, the Uber passenger app will only show 8 cars in the vicinity, but I am certain there are way more than what the map displays. 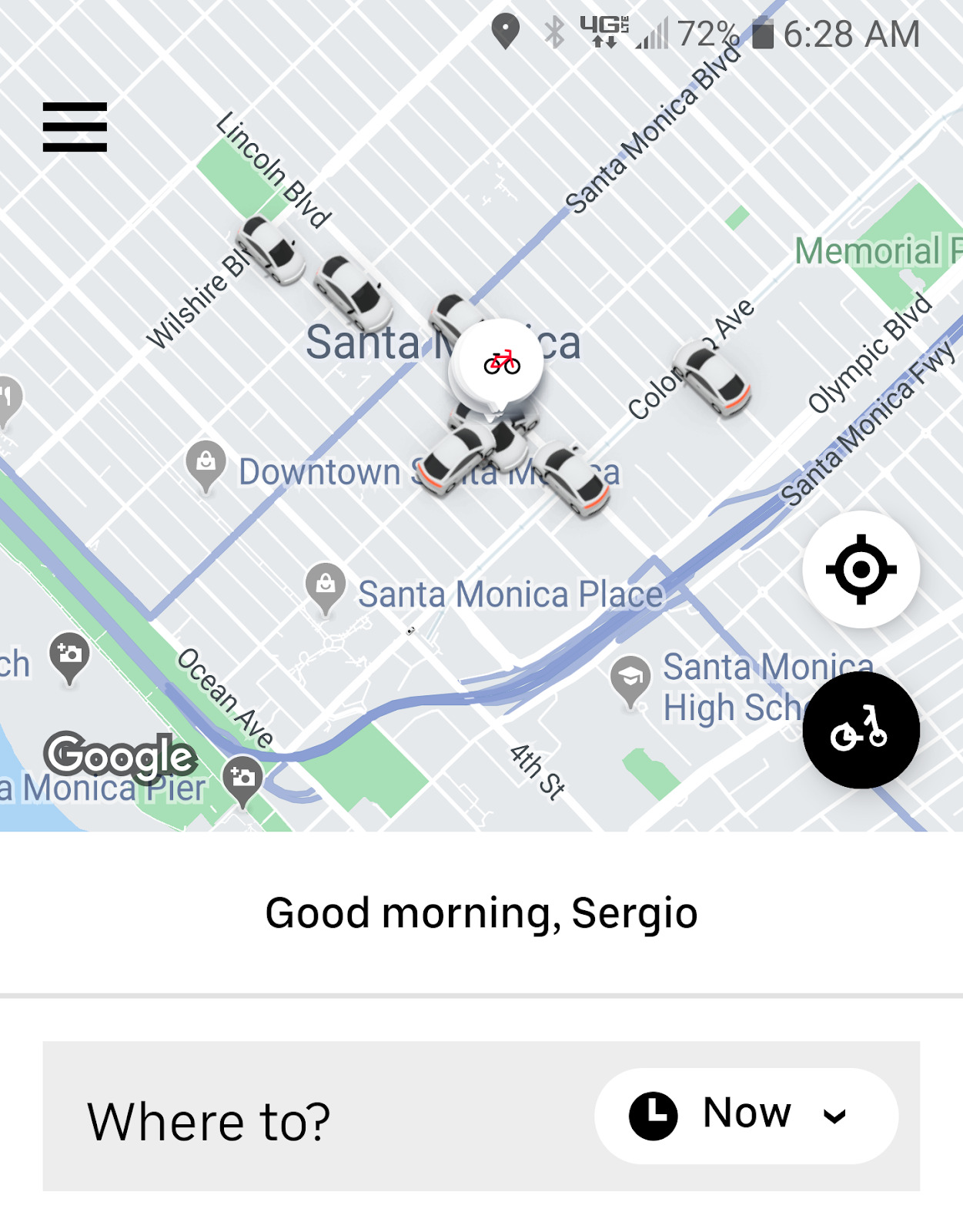 I sat there for 45 minutes after turning my driver app on and still hadn’t gotten a ride – what gives? I believe it was the Uber algorithm trying to find a ride that it can price through upfront pricing and not lose money. What else could it be? Some may call it speculation, but Uber algorithms throttling (slowing pings down intentionally) drivers or time-outs are well known in the driver community.

While I was waiting to get my first ride, I had a chance to price rides on my passenger app. With the upfront pricing and flat rate surge, Uber has totally decoupled what the passengers pay and drivers receive with limited transparency. You may receive some golden nuggets, but they are rare!

Note for California drivers: Uber has removed flat rate surge in exchange for a surge multiplier! Therefore, California drivers may need to tweak the strategies below, but all other drivers should be able to implement them as is.

Here’s a ride I priced from where I positioned to start my morning shift to my house. Notice Uber Black is about the same price as an Uber X! Including my $9.25 bonus, this ride would pay me about $31, however the passenger was getting charged over $97. After what felt like an eternity (but was really about 45 minutes), the Uber algorithm finally sent me a request with the $9.25 bonus attached, I was fully expecting it to be an airport ride or a longer trip. 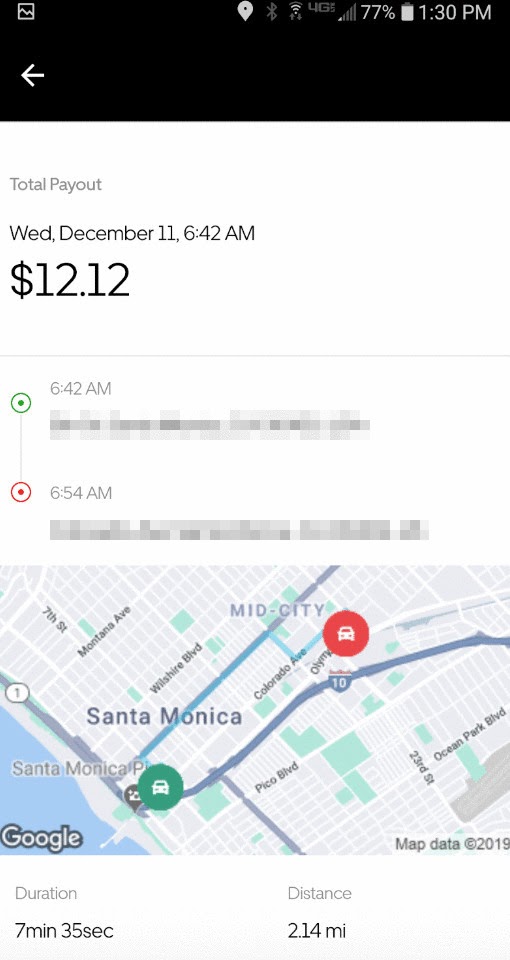 As you can see in the screenshots above, I was paid $12.12 for a short trip that lasted less than 10 minutes, including the pickup but the Uber algorithm had managed to take me off the road for about an hour. Who won in this battle? I certainly didn’t. I waited almost an hour to make $12.12. How Flexible is Driving for Uber Really?

I am not a conspiracy theorist, but some days Uber makes the life of a driver a lot harder than it needs to be. These actions make me question the flexibility and freedom argument of Uber to its core. I had the freedom and flexibility for that early morning shift to make some money, I was at the right place at the right time and still I had no control over how much I could earn since I didn’t get a ride request.

Skeptics may say these are conspiracy theories, but are they? Can anyone tell me that for 45 minutes rides did not exist in the busiest part of town while dozens of cars were disappearing around me, receiving ride requests? Or did the Uber algorithm for one reason or another not see me worthy of receiving a ping? Flexibility and freedom are great but not in a world where algorithms decide your fate!

What do you think, does Uber throttle drivers? Is it just speculation on my part? Are there quiet time-outs for Uber drivers who turn down a lot of ride requests?