Is Your Car Too Small? Lyft Bans Subcompact Cars

For many drivers, subcompact vehicles are their vehicle of choice due to their usually reasonable gas consumption and maneuverability. However, drivers ability to choose some of the subcompacts may be changing when it comes to Lyft’s new policy. Why did Lyft alter its policy? What does it mean for current drivers of subcompacts? RSG contributor Gabe Ets-Hokin dives in.

Recently, Lyft drivers have started to notice an important change in policy at the newly public company. The company is banning subcompact cars but if you’re already driving with a subcompact car, you will be grandfathered in.

“To provide a comfortable rider experience, certain subcompact vehicles are not eligible on the Lyft platform as of February 25, 2019. Subcompact vehicles typically have an interior combined passenger and cargo volume index of less than 100 cubic feet, which makes for a tight space for passengers.”

Gobsmacked, readers reached out to RSG, having discovered a mishmash list of banned vehicles that seemingly made no sense.

So what was behind this change? And should you be worried? 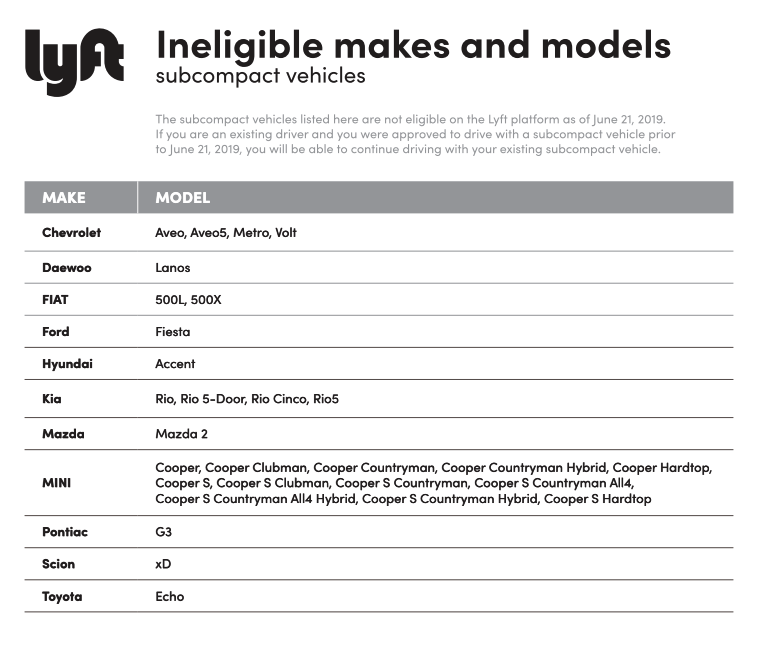 Prior to February 25th, drivers could pretty much drive whatever car they wanted, so long as it had seatbelts for at least five (driver and four passengers) and four separate doors. There were no requirements for interior space. Uber had similar rules, and provided some small cars for its Express Drive and other vehicle-rental solutions, including the (now banned by Lyft) Toyota Prius C.

And why not? If the companies consider drivers “independent contractors,” one hallmark of that independence is that contractors provide their own equipment. If I hire an electrician, and he cuts wire with his teeth instead of wire cutters, why should I care so long as the job gets done, no? Honda Fit: Looks roomy to me, but nope, says Lyft

A new list of cars is on the site (for now). It lists about 60 cars that are excluded. Most of them make sense to exclude (a Beetle convertible? Smart Fortwo? Has someone really tried to use one of these?), but others are mysterious. Other than the reasons above (comfortable rider experience and 100 cubic feet of passenger room), there isn’t a lot of info about what’s going on and why.

When I reached out to Lyft for an explanation, Communications representative Eric Smith provided the following statement:

“We are currently exploring updating the ineligible makes and models subcompact vehicle list. Any existing subcompact vehicle that was added to this list has been grandfathered onto the platform for current drivers. We are continually exploring new, innovative ways to improve the experience for both drivers and riders and will share more soon.”

“Exploring updating?” So they’re considering if they should revise the list. Good, but that still doesn’t explain some confusing choices, which seem to be made as if “some flunky just copied a list of cars and presented it without research,” in the words of proud Hyundai Accent driver Karen Reincke. For instance, said flunky made a very concerted effort to exclude every single Mini model made, number of doors or interior room be dammed, going so far as to even list the two-door convertible, just in case ‘must have four doors’ wasn’t clear enough. How do you make a Fiat 500X big enough for Lyft? Slap a “Jeep Renegade” name on it. Same Chrysler/Fiat platform, identical amount of interior room, just one is excluded, the other isn’t.

Luckily, someone at Lyft must have paid attention, because Lyft has drastically altered the list of ineligible subcompact cars (see above). Now many of the cars that were previously recently banned are ‘eligible’ again.

In addition, if you were approved to drive a now banned subcompact car prior to June 21, 2019, you are able to continue driving that existing vehicle.

Absent any explanation from the Hall of the Pink Mustache, we can speculate as to why this happened. On the innocent side, we may postulate that Lyft merely wants the best experience for its passengers, and hey, you can still use any car that’s already been approved; you just have to replace it with something bigger.

Heading towards the nefarious side of the spectrum, it could be a plot to encourage new drivers to rent on the Lyft Express Drive platform, which will lock them into only driving for Lyft to meet the minimal ride requirements. Do you smell a possible restraint of trade class-action suit? It’s not impossible.

What it Means for You

Even if you have one of the listed cars, not to worry. You can still drive it until it’s time to get a new car. You can try out Maven Gig, or look at our Vehicle Marketplace page for other alternatives to vehicle ownership like Fair or HyreCar.

Personally, I think excluding any car is terrible policy; it will turn away potential drivers, invite legal action and diminish Lyft’s stated goal of being seen as a green transportation alternative. My suspicion is that Lyft got some complaints about some cars being too small and is taking the passenger’s side. You ask me, let the market decide, and if drivers get kicked off the platform for low ratings and too many complaints, it’s on them, not Lyft.

What do you think? Post in the comments if you think Lyft should or shouldn’t exclude certain cars for being too small.