Uber & Lyft Are Locking Drivers Out In New York City

Senior RSG contributor Sergio Avedian has written in the past about Lyft taking the pink gloves off in New York after the Taxi Limousine Commission (TLC) implemented changes, like the minimum wage for drivers and For-Hire Vehicle (FHV) caps. At that time, Uber stood by and did not respond, but over the past couple of months, Uber has started locking drivers out of the platform too.

Have you been affected by these changes? Here are some additional options to earn money on your own time:

After last year’s implementation of New York Taxi Limousine Commission (TLC) minimum wage laws, as well as the passage of regulations capping the number of FHV (For-Hire Vehicles) in the city, Lyft retaliated by not allowing its drivers to turn their app on and drive when and where they want.

This is what drivers were sent via email: 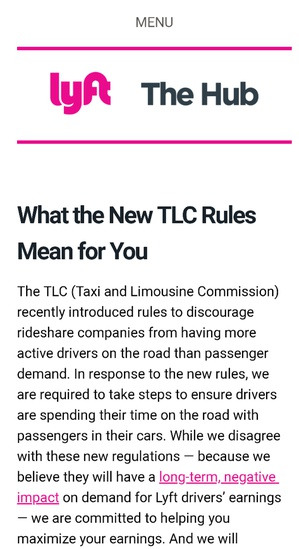 New York City Rideshare Guy readers sent us screenshots detailing how the threshold for being able to drive for Lyft has become more restrictive, with the previous 30 day ride count bumped to 160 rides from 100 a month.

It is usually Lyft that follows Uber, but in this case, Uber followed Lyft and put in even harsher restrictions, to the point of locking drivers out of the platform for hours or permanently. Yes, even when there is peak demand and introduction of a daily/hourly planner!

Take a look at the screenshots below: Uber wants its drivers to serve only Uber. 1000 rides in 90 days is a tough nut to crack to just earn the right to work anytime a driver chooses.

Below is what the Uber Driver Planner looks like. The driver who shared this with us obviously did not meet the strict criteria Uber has set for drivers (above) to be able to log on and drive any time he chooses, and he will only be allowed to log on at the times Uber permits him to earn a living.

According to this driver’s planner, all of Wednesday, January 22 slots as well as all Thursday, January 23 slots were full. He was given five time slots to be able to log on to the Uber platform on Friday, January 24. This looks like an Employer’s time card!

(This screenshot was taken at 10:50 am and the driver was given access at 10 am so it’s possible that some of the slots may have filled up during that first 50 minutes) Over the past couple of days, I have spoken to drivers in New York. Their criticisms include not being allowed to log onto the Uber platform even at high demand periods, with most complaints about being permanently locked out since they do not meet the strict requirements Uber has set. The drivers are in a horrible situation!

Uber and Lyft blame the N.Y. TLC for the drivers’ inability to log on, earn a living, put food on the table and pay their bills.

The following are some of the complaints RSG has received from New York drivers. “This is after driving for them for over 3 years. Lately, I have not been allowed to go online whenever I want. I’m not yet using their “reserve when you’re going to drive” feature. That’s like forcing me into a pre-planned schedule. Lyft has been MUCH MORE WELCOMING lately. I’m able to drive whenever demand is normal without using any reservation system. Last week, many times Lyft let me work when Uber did not. So, I made about $750 with Lyft and only $50 with Uber. My fault? I don’t think so. I think Uber wants us to only drive for them…. as if we were employees!”

Adam chimed in with the following: “In all truth, I’m not entirely clear where TLC regulation stops and Uber/Lyft greed starts. Clearly, both Uber and Lyft are gaming the system to reward only the most active drivers. But Lyft’s actions are particularly egregious. Not only are drivers required to maintain high rider ratings, high acceptance, and low cancellation rates… Lyft also requires drivers to maintain a minimum of 160 rides per month. Not terrible in a normal climate- but take a vacation… get the flu… have a loved one entering the hospital and you’ll see the problem.

My story is not unusual. I took a 2-week vacation late last fall and I’ve been trying to climb back ever since. I’m in a rideshare blackhole, locked out for hours; sometimes full evenings at a time, no longer able to reach the arbitrary number needed for alleged full access. Toggling to Uber is no help because Uber has it’s own arbitrary system, allowing drivers without full status – via some ludicrous color-coded stupidity – to just 11 hours????? The rest of the time you’re held hostage to weather, traffic congestion and the hope that if you drive around enough – burning gas in your XL… You’ll find a small patch of activity.

The result: I’m down 40% and can no longer rely on rideshare to pay my car loan, let alone college tuition for my kids. “Let me explain… the system is geared towards favoring cars that do more volume… If you can keep an acceptance rate of 90+% and do like 1500 rides in 3 months you will keep an ability to drive in NYC without being locked out. Otherwise, you are locked out.

Lyft has a requirement of 180 rides a month and an acceptance rate of 90% on a weekly basis.

Either way, if you have an SUV like I do, and work only black you are screwed.

You will be forced to pick up x rides for volume. This is not only the, controlling us, but it’s discriminatory. Muneeb”

He is locked out of the platform, even when there is high demand, and included Uber’s response after he complained to customer service. As to be expected, the Independent Driver Guild is not happy about this lockout, either. They have called on the new TLC Commissioner to address drivers’ economic concerns, particularly in regards to the lockout. From a press statement released by the IDG, they say:

“We welcome Aloysee Heredia Jarmoszuk as the new Taxi and Limousine Commissioner and look forward to working with her, starting with immediate action to address the economic crisis facing thousands of ride-hail drivers in our city,” said Brendan Sexton, Executive Director of the Independent Drivers Guild. “Uber, Lyft and Via are scamming drivers out of fair pay, pushing thousands of families into economic disaster. Drivers are losing their livelihoods, having their cars repossessed, and risking eviction. Our crisis counselors are overwhelmed. The new Commissioner must act quickly to hold the app companies accountable and stand up for New York’s hardworking for-hire vehicle drivers.”

My Take on the NYC Lockouts

What the drivers are going through is truly horrible. They must feel like they are in a game of Whack-a-mole!

This is all about control, it always has been for Uber and Lyft.

However, I do understand that Uber and Lyft are public companies with one goal in mind: reaching profitability as soon as possible. Why would they want to pay drivers sitting on their couch with their app on and collect $17.38 per hour? Why would they pay their drivers while they are circling Manhattan without a passenger looking for a ride?

If drivers want higher pay, there are trade-offs, but should they be locked out by Uber and Lyft as Independent Contractors? ABSOLUTELY NOT!

However, a very important consideration for a passenger is driver ETA for getting picked up! Since there is no brand loyalty, if Uber can pick them up in less time than Lyft, the rider will choose that service. Therefore, both outfits have flooded every street corner of every major city with cars to lower passenger pickup times. Take a look below! 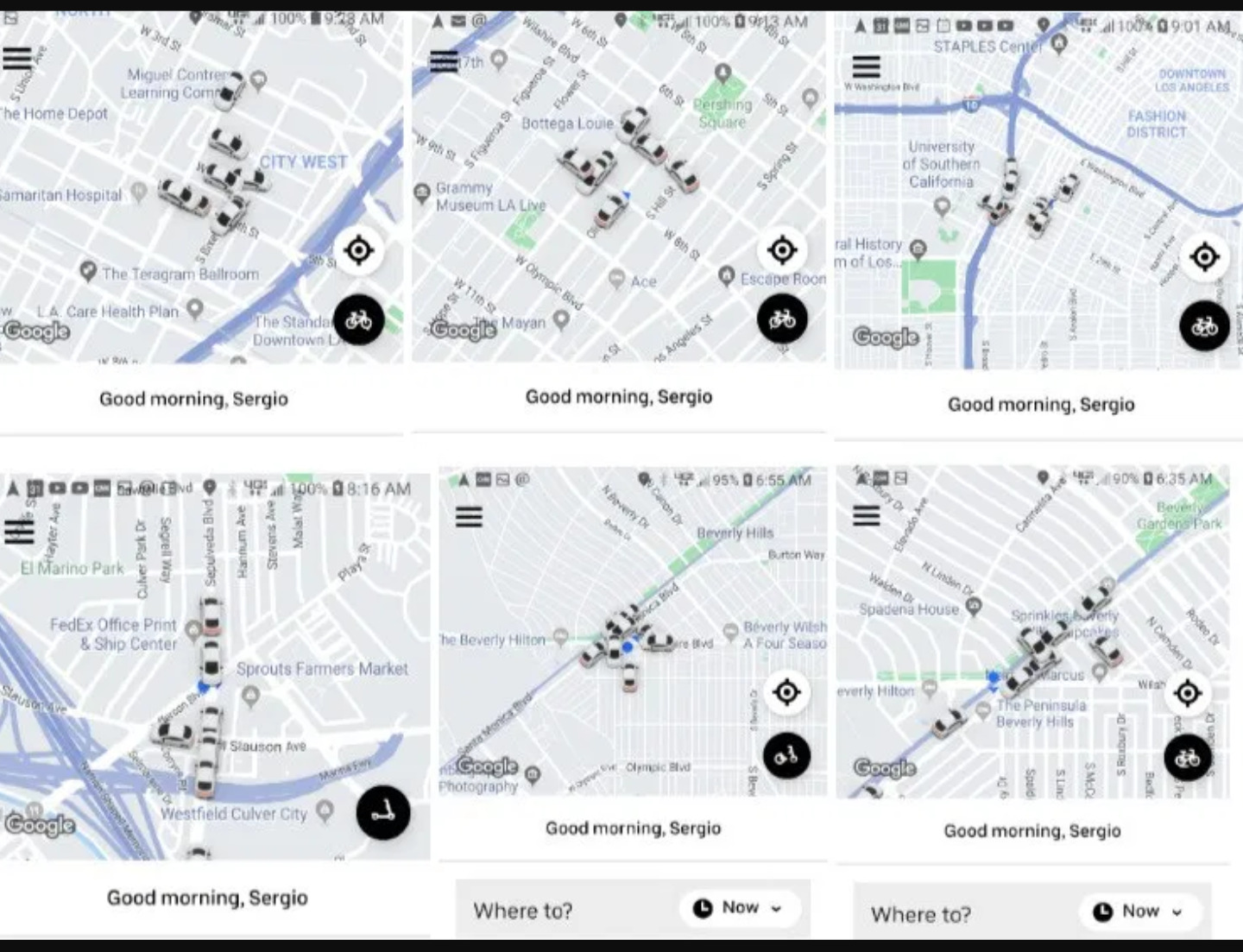 For the driver, utilization rates mean something very different. It means having a passenger in the car and the wheels turning. In a busy city like New York, low driver utilization rates create traffic congestion problems that even Uber and Lyft can’t ignore nor deny. The N.Y. TLC is requiring driver utilization rates to be much higher by lowering the empty cruising time to 36% by the end of 2019 and 31% by the end of 2020. Passenger wait times were cut by more than half over the past few years. How was this accomplished? By dumping unlimited amounts of cars on already congested city streets. How did that help utilization rates for the drivers? It didn’t, and now they are competing for a share of the pie, which is not growing as fast as it previously did.

However, is this sudden shift in restrictions set by Uber and Lyft justified? The initial public relations campaign for Uber and Lyft boasted of logging onto the platform anytime a driver chooses – ‘flexibility and freedom’ they called it. But it seems like all that flexibility and freedom can only be achieved without any regulatory pressure, like having the cake and eating it too.

But, come to think of it, Uber and Lyft prove my point here. Their rider demand could have been supplied with a lot fewer drivers on the road!

Then why oversaturate the marketplace? Who are the winners and losers here? We all know the answer – the drivers LOST!

What do you think? Are drivers caught between NY TLC and the TNCs? Is oversaturation a big problem in your city? Should TNCs be regulated like they are in N.Y.?