By Chonce Maddox RheaOctober 22, 2020No Comments

In the battle between Waze vs Google Maps, we asked drivers which map app they preferred, then had RSG contributor Chonce Maddox-Rhea break down which app is truly better for drivers. Which map app do you think is the best for rideshare and delivery drivers?

If you’re tired of using Uber and Lyft’s in-app navigation system or just want to switch it up, there are two great choices with Google Maps and Waze.

In 2013, Google purchased the Israeli-based navigation app, Waze, for over $1 billion. Sure, they are both owned by Google, but if you’re wondering ‘what’s the difference between the two’ there are some noticeable ones. Google and Waze both calculate the best route for drivers but they each do it in their own unique way.

This is why we have some people who are set on using Google Maps and others who favor Waze. When we polled drivers about which navigation app they preferred, Google Maps won pretty easily – but there are still quite a few Waze users! 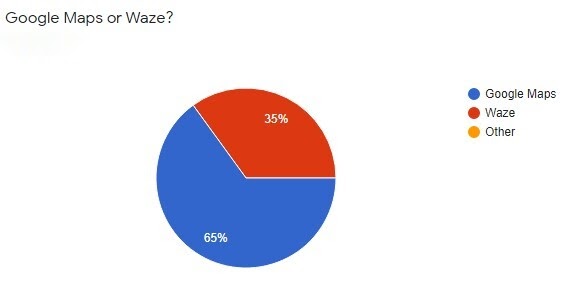 The Main Differences Between Google Maps vs Waze

Google Maps uses speed data from other drivers who are using the app and road sensors while Waze is more actively maintained by the drivers alone. Waze users are more active in reporting what’s going on out on the road. As a result, Waze is more community-driven while Google Maps is more data-driven.

The two apps also show drivers restaurant and gas station options a little differently. Both of those stops are pretty important especially for people who are on a road trip. With Waze, you can look through categories simply by clicking on the Where to? option on the main screen.

If you want it to be a quick trip, they give you the option to select the drive-thru option (mainly for restaurants or fast food). If you aren’t picky and/or have more time, then you can also just select the food option.

Google Maps gives the quick option for take out and delivery choices in your area also on the home screen. Google also includes pictures of the restaurant and food customers have shared online. Both maps do not come standard on each device. I have an iPhone and of course, Google Maps wasn’t preloaded on the phone already, but I can easily download it, along with Waze.

Android devices typically will have Google Maps standard with the phone while iPhone users have their own version of Apple Maps already ready to go with their device.

Take a look at our video about Google Maps versus Waze below:

According to viewers of our video, they had this to say about Waze vs Google Maps:

When I was driving Rideshare (up until the pandemic), I preferred Waze. However, that’s probably because that what I was already using for personal driving and what I was most familiar with. I have found that every time I’ve ridden in a rideshare as a passenger, the driver always seems to use Google Maps.

If there was one feature I really wanted them to add (and I don’t know if Google Maps had/has this), I wanted the ability to toggle avoid/allow toll roads right on the front screen. I’m not going to pay a toll when there is no pax in the car, but I would often want to turn it on after the ride has started. It was frustrating to have to navigate through menus to toggle avoid/allow tolls as this is a distraction when driving.

This driver had this helpful information about Waze vs Google Maps:

Google maps in certain areas like Chicago you will lose the cellular telephone. Includes airport. Waze will stay on until the ride is over.

And this driver in LA had this to say about Google Maps:

I’ve driven for almost 5 years and definitely prefer (although it’s not perfect) Google Maps. The following representation is specifically for Los Angeles. Waze will have you make an inordinate number of turns to theoretically save a minute or 2, but they never take into consideration how long it will take to complete the turn, which during high traffic times may be very counterproductive.

Then what is even worse is when they direct you to cross a major street during rush hour without a signal to allow crossing in a reasonable amount of time. This may also happen with Google Maps, but less frequently has been my experience.

In addition to the community-driven updates that differentiate Waze from Google Maps, there are a few other key differences, including:

Another big difference between the two navigation apps is Waze’s focus on alerts. Alerts are something drivers report on Google Maps, but Waze goes more in depth. One of the most annoying things I’ve found using Waze is that it does sometimes play ads while you’re at stoplights or pulled over on the side of the road. This is distracting and can impact conversations with riders, plus if you’re pulling over to look at a driver or delivery request, you could accidentally miss it (or accidentally accept it!).

Overall the Waze interface offers a more up to date option. Waze gives drivers alternative route options right away. I’ve noticed Google Maps ‘thinks ahead’ and then presents you an opportunity to change your route, but this alert goes by too fast for you to make a reasonable decision (plus it usually does it while you’re driving, which is dangerous!).

Waze also give you an estimated total for the tolls along your route before you even begin. If your state happens to offer a toll pass that gives you discounts on your fares, Waze lets you enter that so you have the most accurate total.

Waze does require data connection while competitors can work offline. Because users contribute such up to date data for the route, Waze gives drivers the best route options. This driver had this to say about Waze vs Google Maps – specifically about the real-time traffic data:

Waze is a win win for me hands down. You can’t beat real-time traffic data. I can’t tell you how many times Waze has saved me from sitting on the freeway for countless hours, because something just happened. One example would be when I was taking my son to school early in the morning. Traffic started to slow down unexpected. I checked the Waze app, and it turns out the freeway had just got shut down due to a fire. I was lucky enough to make it to the next exit and get off.

In 2018, Lyft switched the in-app navigation option for iPhones to include Google Maps, which makes it easier for rideshare drivers to use. RSG contributor Joe discussed how to use Google Maps with Lyft’s navigation below:

Instead of having to switch back and forth between the Lyft app and Google Maps, you now have both in one place. Having this for both Android and iPhone devices makes using navigation that much smoother. You will get all the alternative route options along with the estimated time and distance of each route.

Google Maps does give you a little more warning before turns, which is helpful. Sometimes it’s hard to tell which turn is the correct one if the blocks are close together.

Both apps will verbally let you know which side of the street the destination is on, which is a big help if you aren’t able to physically look at your app.

Setups are pretty similar with both apps have directions on the top while remaining time and distance to your destination on the bottom.

Here’s a quick comparison of each app’s features. Who Wins: Google Maps vs Waze

Both apps are generally pretty easy to use, but as you can see by now Waze is better at offering more accurate updates. There have been too many times in the past where Google sent me the wrong way or didn’t warn me about upcoming traffic.

If you need to find a gas station fast, Waze now has a Spotify integration that can quickly identify that. With Google Maps, you have to do a little more work to pull that information up.

Waze is a lot easier on your data as well and their voice direction is customizable. You can use a well-known celebrity’s voice to navigate your trip or you can even record your own navigation cues to navigate your own trip.

Since both apps are owned by Google, I’d say Google has a 100% chance of winning this debate. However, when comparing the two apps side-by-side, Waze is the better driver-focused app.

Waze offers real-time information regarding road closures, construction, and traffic conditions. All of this can benefit you when you’re doing rideshare driving or food delivery. Even though Waze is not available offline, it eats us less of your data which is helpful to full-time drivers who rely on navigation to work.

Which is better, Waze or Google Maps?

Of course, this is all up to personal preference, but in my opinion Waze is the better app for rideshare drivers. Waze seems to have more features that assist drivers during trips and have provided more accurate data and direction in a more efficient way.

Does Waze app use more data than Google Maps?

Waze uses significantly less data than Google Maps. The average amount of data used by Waze is 100 MB per month or around 0.23 MB per hour. Google Maps uses 0.67 MB of data ever 10 miles and 0.73 MB of data every 20 minutes.

Is the Waze app owned by Google Maps?

Why are Google Maps and Waze separate apps?

Google Maps is an app that is more data-driven and designed to select the most efficient route while Waze is community-driven. Waze gets data from other users and can better tailor itself to your driving experience while providing real-time information

Which map app do you use for navigation while driving or doing delivery? Both, neither, or something else?