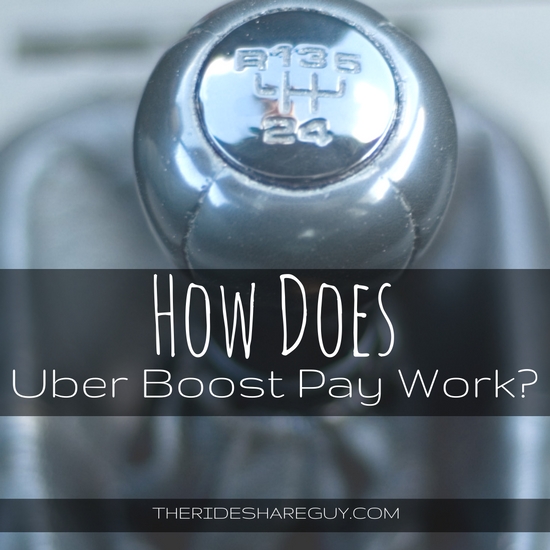 How Does Uber Earnings Boost Work?

Harry here.  It seems like every few months Uber is offering some new type of promotion or incentive but some of them can be quite lucrative.  Today, Senior RSG contributor Christian Perea, takes a look at Uber’s latest promotion for drivers called Uber Earnings Boost.

Over the past year, Uber has been offering all sorts of promotions, driver incentives and guaranteed pay.  But today we’re going to talk about one of the newest incentive structures called Earnings Boost.  The gist of this program is that it offers drivers guaranteed surge pricing on fares that originate from a certain area at a certain time while charging the passenger regular prices.

Uber has been spending a ton of money to subsidize rides for passengers and pay for drivers in order to create the largest, densest, most expensive transportation network in the world. These promotions tend to be offered in bigger markets where Lyft is most competitive, but we’ve also seen them rolling out in other places too.  These promos won’t last forever, though, so get yours before they are forced to pull back and try to make an actual profit. I think it’s important to know about this new program so you can take advantage of it while lasts. Uber seems to be moving away from average hourly guarantee pay and Power Driver Bonus and shifting more towards the Uber Earnings Boost model (right now they are also testing something called Power Driver One).

But if there is one thing we have seen with Uber this year, it is that they are not afraid to experiment with multiple and massive driver incentives.

How Do I Get Uber Earnings Boost? Related Video: How does the Uber driver app work?

Uber seems to be doing a better job these days of ensuring that you know you’re eligible for a bonus where as in the past it was almost like they wanted to make it as tough as possible to figure it out.

Typically, earning boosts happen during the times when they’re trying to incentivize drivers to get out on the road: rush hour/commuting hours and Friday/Saturday night party hours. And the boost amounts during the times of higher demand are also higher as seen below. The Boost Area should also display on your app in a red outline when the boost is available (it won’t show up during non-boost times or if you didn’t receive the offer). And any rides originating from within the red boundaries of the app will automatically have a surge multiplier attached to them.

You used to have to wait until the end of the week to see the “Boost” attached to each ride but recently Uber has updated the app to let drivers know each time they get an Uber Boost. This sample screen shows the area where all rides will receive an “Uber Boost”. Meanwhile, if a ride is above the Boost amount, the driver will receive the pay for the higher Surge amount.

What If Surge is Higher Than the Uber Earnings Boost?

If there is natural surge within the area of the Boost while it’s in effect, you will get paid whichever one is higher. So if you look at the map we’ve shown, all of the rides originating within that red boundary will be on Uber Boost. If you are lucky enough to get a ride within the Uber Boost area that is all red and 3.0X, you will get 3.0x instead of the Boost amount.

I already know what you are thinking. NO. If you get a surge fare at 3.0X in a 2.0X Boost area it WILL NOT multiply to 6.0X. That would be pretty cool though…

Uber wages a constant internal battle figuring out the lowest prices they can pay drivers while ensuring that supply stays in check with demand.  Seeing as this is the third or fourth iteration of promotional pricing this year, I wouldn’t be surprised if it was only temporary or there were big changes ahead.

But unlike past programs that incentivized doing the maximum number of short trips, this promotion seems a lot simpler. You get the earnings boost offer, the offer pops up on your app and then you drive within the red lines and every ride gets multiplied by whatever the boost amount is. If anything, it seems to address a lot of the transparency issues we’ve criticized Uber about in the past, so maybe it will be around for longer than we expect.

Drivers, what do you think about Uber’s new Uber Earnings Boost promotions?  Have you been offered one and if so, what was your offer and what city are you in?