A few weeks ago, we started seeing reports from many drivers in California that they were briefly deactivated by Uber by, seemingly, mistake. We thought that was the end of it until RSG contributor Jay Cradeur let us know he had been deactivated by Uber just last week – for no reason. It seemed like it would just be a brief deactivation, but it’s gone on much longer than anyone anticipated. Today, RSG contributor Jay Cradeur details what happened with his deactivation, Uber’s response, and what this means for drivers.

Deactivation.  It is a miserable word and no driver wants to experience it.

Deactivation is what happens when Uber or Lyft determines that you are unable to drive and earn money.  I was deactivated on Wednesday morning of last week.  And as of right now, more than a week later, I am still deactivated. Allow me to share the frustrations and anger of the past week trying to get this resolved. It all started with this on my phone app: And then I checked my emails to discover this: 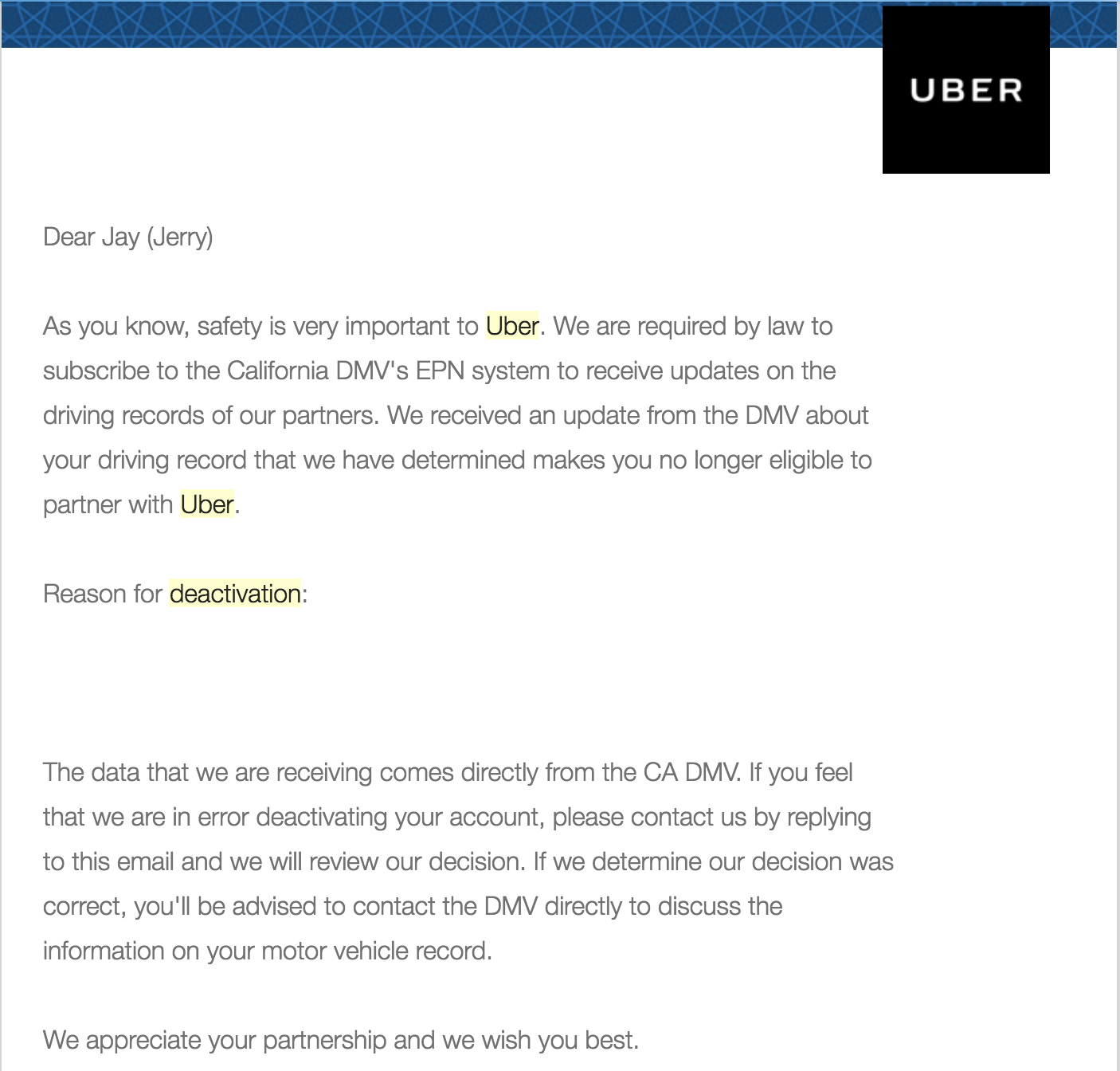 What is the reason?  Did you notice that the reason section is blank?  How does a company as big and sophisticated as Uber send out an email like this?

Without hesitation, I responded to the email.  I wrote:

There is no reason stated.  I am completely baffled that you would deactivate my account and not provide any reason.

I have no idea why you have deactivated my account.  Over 7,000 trips.  2 years with you guys.  a 4.92 rating.  No recent accidents or moving infractions.  My insurance is current.  My registration is paid.

This is unbelievable.  De activation and no reason provided.

I hope someone will contact me immediately so we can get this resolved.

Do you know what I got back?

Unbelievable.  Uber tells me to respond to the email, but they are not set up to receive any emails.  Wow!

On Wednesday morning, at 5 a.m., instead of preparing to drive, I spent the next hour trying to find out why I had been deactivated.  After sending the email, I used the 24-7 phone support on my Uber app.  A young woman at Uber support told me it had something to do with my background check.  That was all she could tell me.

I have been driving for 2 years and I have already passed two annual background checks.  What could I possibly have done in the last year to fail a background check?  All I do is drive for Uber and Lyft and travel.  I naturally asked her, what did the background check show?

Here is where it gets crazy.  She told me that she does not have access to this information.  She went on to say that I would have an answer in “24 to 48 hours.”  “OK,” I thought to myself, “I will drive for Lyft for the rest of the week, and certainly by Monday this will be resolved.”

Related: It’s always smart to have a back up! Sign up with Lyft here.

I then went out and drove for Lyft during my morning shift.  Being proactive by nature, I returned home and called Uber again to see if it would make sense for me to go to the local Uber Hub and get some answers there.  The young man I spoke to told me that would not do me any good.  He then told me that there was an issue with my DMV background check, and that it would take 5 to 10 business days to get this resolved.

At this point, I was getting very angry.  Uber was taking away my livelihood for up to two weeks and had provided no specific reason.  I asked the support guy how it was possible to deactivate me while no one seems to know why I was deactivated.   I said, “Shouldn’t Uber have a valid reason to deactivate me before doing it, rather than the other way around?”  He barked at me “Because it is the law!”  I had to laugh to myself at this point as I thought about all the legal transgressions Uber is accused of in the press.

Is This Happening to Others?

I then went online to see if I still had access to my account.  I also wanted to know if Uber was going to pay me for last week’s driving.  They were.  I then did a search to see if I could find any answers on my deactivation.  Here is what I found on the Uber website: By now my head was spinning.  Does anyone know what the heck is going on?  I was told that it is my background check, then my DMV record but no reason is given, and then the website told me it is my cancellation rate.

Since I am always above a 90% acceptance rate, I can’t imagine how my rate is a valid reason.  I decided to just chill out and let Uber do its thing.  I am more than happy to drive for Lyft full time.  So that is what I did, I drove for Lyft and made some good money.

Then later that same day, I received this email from Uber: Uber admits that some deactivations occurred in error.  It now became apparent that the right hand does not know what the left hand is doing over at Uber.  I had been told many reasons for deactivation, none of which made any sense, and no one could give me any answers, but they sure could deactivate me quickly.

How Long Will it Take to Be Reactivated?

On Sunday, 5 days later, I called to see if I could get an update.  I spoke to an Uber support team member, and he told me that they just now received my DMV record and it shows a suspension of my license as of 12 Noon that day.

At this point, I felt like I was in a Twilight Zone episode.  Everyone at Uber had stopped making sense.  He went on to tell me I should check with the DMV and get it straightened out.  OK, maybe there was some type of error at the DMV that I did not know about.  I was willing to give Uber the benefit of the doubt.

Did you know you can pull your own DMV record online (at least in California)? It cost me $30 but I wanted to know what was going on.  As you can see below, my DMV record is clean.  Here it is: There are no violations, convictions, suspensions, nor revocations.  Certainly, I naively thought, once I send this to Uber, they will reactive me.  So I did.  I contacted Uber, asked how I could upload my driving record, and emailed it to Uber straight away with the request that I be reactivated immediately.  Guess what?  Uber sent me this: At this point, Uber can do whatever it wants.  I have thrown my arms up in the air.  I have no say in the matter.  I have wasted hours defending myself to no avail.

Uber boasts about their 180 days of change, but they don’t seem to understand the importance of the little things, like common courtesy, telling a driver the truth, using some real customer service, showing empathy, or justifying their brutal actions with sound rationale.  I feel like an insignificant cog in a very big machine and dysfunctional machine.

Let’s face it. We are all drivers and we are all easily dispensable.  If I go away, there are 10 part time drivers to take my place.  We, the drivers, seem to be worth next to nothing in Uber’s eyes.

It is a good thing Lyft is around to keep Uber honest.  Behavior like this is exactly the reason passengers and drivers alike are shifting their allegiance from Uber to Lyft.  It is why the value ratio of Uber to Lyft has shifted from 10 to 1 (Uber was valued at 10X of Lyft) to 5 to 1.  Lyft does more things right.  It is much like how passengers shifted their allegiance from taxis to Uber back in the day.  It is a real shame.

It’s been over two weeks since Jay was deactivated, and Uber still hasn’t gotten back to him about anything: what happened, how long it will take to be reactivated, if Jay should do anything – nothing. Below is a screenshot of Jay’s recent exchange with Uber: At the time of publish, Jay still has not been reactivated by Uber.

I’ll keep you posted.  Has anyone else had any run ins with Uber’s support team, deactivation issues, or frustrations with Uber’s automated emails?  Feel free to share your pain in the comments section.