Everyone wants to know the best driving strategies, how to get paid and how to earn more money as a rideshare driver. One of those answers is “get more tips” – but how do you know which app, Uber or Lyft, has better tippers? Intrepid RSG senior contributor Will Preston tackled this difficult question with his own research – the answers may (or may not) surprise you!

Lyft drivers always talk about how they get paid more on Lyft, and in our most recent survey of over 1,100 drivers, they did indeed report earning over $2 per hour more than Uber drivers.  Since the rates are the same in most cities (except for Lyft Line rates, which are higher), there are only two reasons this could be the case. Either the bonuses are way better, or Lyft passengers tip more.

The former has never applied to me, as the Power Driver bonus always requires way more rides than I’m capable of doing in a weekend of driving. The latter never made sense to me either, because I always got plenty of cash tips from my Uber rides, both before and after they supported tipping.  So I never really understood the “I get paid more with Lyft” mantra.

Related: Encourage people to tip more – by feeding them and getting paid for it with Cargo. It was even an uneven playing field, for a while, since Lyft always had tipping in the app and Uber had what can only be described as an anti-tipping culture. Very early versions of the app even said that the tip was included. It got only slightly better with the “there’s no need to tip” line.

Uber drivers were even told to refuse tips, and that they were only to accept them if the customer insisted. Passenger comments from those days showed they liked the fact that there was no need to tip. Unfortunately, some of them were under the impression that they were tipping; they just weren’t doing it with cash. They thought a tip was actually included, like it was in UberTaxi. Uber finally caved in June 2017 and started offering tipping in the app. Early reports from Uber drivers showed the tips were relatively small when compared to Lyft tips.

Most feel this is due to the years of anti-tipping messages from Uber, where others feel the way Uber displays the tip option significantly decreases the number of people that see it, as passengers only see the tipping option after they have rated you. Since just under half of my passengers rate me, the other half never even see the option to tip me.

My Uber revenue greatly outnumbers my Lyft fares, roughly 5 to 1. I therefore felt the only fair way to look at this is tips as a percentage of overall fares for each service. First I’m going to look at the “official” tips, and then I’ll try to add cash tips into it. I also had to be on the lookout for random Lyft bonuses, as they were included in my number as well. I made sure to exclude all bonuses from Lyft and Uber calculations. Once I calculate the fare portion of my revenue (e.g. $18.26), I then divide the $1.00 by $18.26 to get my tip percentage, which is 5.48%.  Things aren’t looking much better for Lyft so far. But one week’s pay isn’t enough of a comparison, especially considering I only had two Lyft rides that week. So what I did was I added all payments and tips together, then divided the total tips I received by the total revenue I received. I know we haven’t talked about cash tips yet, but stay with me.

Lyft passengers therefore tipped 14.37% of their fare, or just over twice what Uber passengers tipped.  (Side note: My average fare was roughly the same between the two platforms, at about $8.50.)

I was surprised by this for a few reasons.  I think the biggest reason is that Lyft tips have often gone under the radar for me, as I don’t see them as they are happening, where as I usually see or hear my Uber passengers putting tips into my tip box. My Lyft passengers tend to be a younger crowd, a group of people with a reputation of not tipping.  For all of these reasons, I was surprised that the Lyft tips came out so high.

At the same time, I wasn’t surprised, because Lyft passengers have always known that tipping was an option. Tipping wasn’t discouraged the way it was with Uber, and I know many passengers who have told me they choose Lyft because of that option.

Even though they knew they could tip cash with Uber, many passengers tell me they don’t carry cash. I also know passengers who take Uber because of its no tipping mentality. Add that to the fact that the Lyft tipping option appears as soon as you end the ride; it’s not hidden behind the ratings screen like Uber’s is.

What about Cash Tips?

I’ve done pretty well with cash tips compared to most Uber drivers I’ve seen, and I think it’s largely due to the tip system I designed.  In the past, I wanted to make sure passengers knew it was OK to tip – especially the Uber ones. There were also other things I wanted them to know, like what four stars actually means. I also wanted to give them reasons to tip me. So I designed my own tip system that included electronic signage that gives them tips on how to better use Uber and Lyft, while also telling them other things I want them to know (e.g. four stars is bad!). I then incorporated a candy tray with mints, and a glow-in-the-dark charging cable and phone holder.

Before using this system, I got next to no tips.  Now I just mount it to my passenger headrest,  seed it with a few fives and ones at the beginning of the night, and voila!  I usually get about 15-20% in tips every night without saying a word.

I’m about to start selling them online, and I call it RideshareIQ: Riders who know more, tip more. If you’re curious about it, feel free to check out my site.

Based on my average nightly take, that means I average around $30 in cash tips per night, which is about 15% of my usual fare amount for the night. Interestingly enough, my percentage of cash tips hasn’t gone down since the introduction of tipping in the Uber app. Some people just like to tip you cash.

I really couldn’t figure out how to add the cash tips into the equation, since I have no idea which tips are from Uber passengers and which are from Lyft passengers. I will say I ran a series of models.  No matter what I did, Lyft still came out on top.

Lyft passengers definitely tip more – a lot more it would seem. I might try going Lyft only for a couple of weeks to see what my tips look like.  Maybe if I did that, I could hit the power driver bonus as well.  I’m just not convinced there’s enough Lyft business in San Diego to keep me that busy. I’m worried I’ll end up with a higher tip percentage of an otherwise smaller take.

Readers, what do you think about Lyft tips vs. Uber tips? Have you noticed Lyft passengers tip more, or do you find Uber pax tip more? Do you think I should try driving just for Lyft to see what my tips look like? 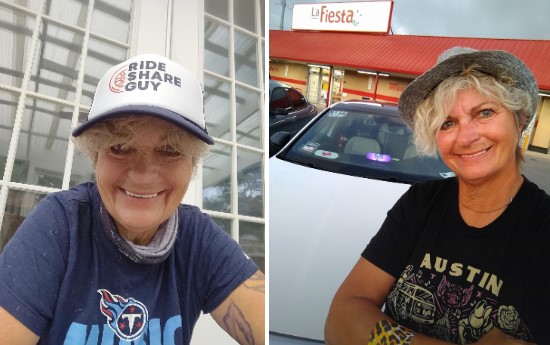