By Paula GibbinsJanuary 17, 2020No Comments

Cargo, the snack vending machine box in your car, abruptly announced it was ceasing its snack boxes and going in a different direction. We had senior RSG contributor Paula Gibbins investigate the sudden change and share what other drivers are doing with their leftover Cargo snacks.

Many of you may have already heard that Cargo is ending its snack service. What you may not realize is that Cargo is still sticking around in some fashion, just not what you’re used to. Instead of the box filled with snacks that drivers can put in their vehicles to make a little side money, Cargo has paired with Uber in a cartop display program. Cargo’s website homepage boasts, “We’ll install a display on top of your vehicle which shows ads while you drive. Make extra cash, even when you’re not taking Uber trips.”

First, for those who don’t have Cargo, only recently got Cargo, or had signed up for Cargo when it rolled out into their city, Cargo’s premise was pretty simple. In our Cargo Box Review, author Christian Perea broke it out:

[Cargo is a] vending machine full of snacks and supplies for passengers (many of which are free!). They send a “Cargo” box along with anything that goes inside it to drivers. Drivers then earn money on the side by being paid for whatever is sold or given away through the Cargo box. Basically, instead of paying for a bunch of snacks to increase your tips and ratings, Cargo will send you everything you need AND pay you in the process. 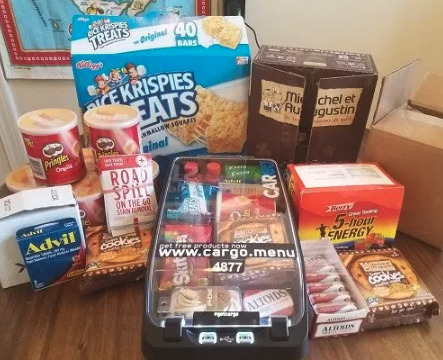 Example of what was in a Cargo box

Overall, we recommended it after testing it out. We found it received such a positive response from passengers and led to more tips that it made it worth it – and apparently, so did many other Cargo users.

So… What Happened with Cargo?

Then, seemingly out of the blue, drivers who currently use Cargo received an email similar to this one: One Reddit thread showed an assumed driver stating, “Be prepared for Uber’s to look like New York taxis everywhere.”

As a company that is trying to differentiate and compete with taxis, it might not be the best move to look more like a taxi, but depending on the earning potential, drivers might just go for it.

Another part of the thread had people expressing displeasure with the service Cargo and their snack boxes, citing that passengers were either too lazy to scan the code to receive free snacks or they didn’t trust the idea of scanning something they didn’t know, potentially giving away information about themselves or opening their phones up to spam. Other posters point out that encouraging passengers to eat in vehicles is not something most drivers would do due to the mess inconsiderate riders make including sticking gum on the floor or in the seats for others to find later, leaving wrappers behind and just generally leaving crumb messes on the seats and floor.

Lastly, there are drivers on Reddit who just got their Cargo box for the first time a couple of days before this announcement was made. Now they are stuck with a whole box filled with candy, not sure what they are allowed to or should do with the contents or with the box itself.

I had the pleasure of hearing from someone who has used Cargo since it first became available in Boston. Here’s what reader Andrea had to say:

“Cargo was given products or purchased products from manufacturers to keep items in front of customers. Sometimes it was to remind people to buy things they already were familiar with, other times it was to get them to try something new and eventually purchase it. As I understood it, being the intermediary they received advertising dollars.”

“I enjoyed using them [Cargo] and selling, occasionally, paid products to my passengers but mostly handing out free products to them. People enjoyed it and enjoyed talking about it. Since I was one of the first, they had never seen it before and always had lots of questions.”

Andrea explained a bit about Cargo before and after they partnered with Uber: “I thought it was a fabulous idea, I still do, but now that I am mostly working for Lyft very few people inquire or even take anything. When I joined it was before the Uber partnership and it was a novelty. I did not always like the selections that they provided to us, but they changed regularly enough that it was fine. When they were small, pre-Uber partnership, they were more responsive to independent requests and apparently they had better customer service.”

Will Andrea use the rooftop display now being advertised on Cargo’s website? “I have a Lincoln Town Car and I only drive part time so I would never put a rooftop display on my car. I have considered having it wrapped or using tablets in my car as advertising but have not done so to date.” (See our suggestions below for companies that will wrap your car or allow you to earn more with tablet advertising.)

Here’s how Andrea (and others) found out about the sudden change that Cargo is making: “The only explanation was in the email saying they were going to focus on the other side of their business. This is very sudden because I just did a survey for them asking whether I would be interested in having condoms in my box. I replied yes, and then a matter of days later I received this email saying they are ending the service. Perhaps sales were not as good as they made out or perhaps the bonuses that they were offering as special prizes were too extravagant for the income that was being generated.”

So, what now? She’s got their box that they told her not to return and a few items left. This is what she’s deciding to do with it:

“I plan to reuse the box removing their logo, offering the items I have left and adding items of my own, that I have always offered the passengers. Some are free. Some I will charge $1.00, and I will look for other low-cost items that I can charge in the same price range. I already have a merchant account or I could use PayPal or I could use Venmo for payment.”

From other drivers who reached out to us about Cargo, this seems to be the consensus. Most drivers are going to use up their Cargo supply and either sell the products or offer them for free. If you are thinking of doing this, make sure to use a Cash app account so that passengers can quickly and easily pay you.

Other Ways for Drivers to Earn Extra Money

There are always other apps and physical additions you can bring to your rideshare services in order to earn an extra buck or two as you go. Here are a few suggestions you can look into and see if any work for you.

Vugo allows you to entertain your passengers along the way. Part of the deal with Vugo is in-car entertainment like video games, apps, film shorts, sports, news and more optimized for passengers, making their overall experience better than being in your empty, Vugo-free car.

What all that really means is Vugo provides content that is sure to be seen by riders while also earning drivers money. This kind of advertisement is displayed on a tablet in your vehicle where your passengers can see it and interact with it. You get a cut of the advertising revenue.

Firefly is one of the more noticeable rideshare advertising companies since they slap a lighted billboard on top of your car, but they’re one of the only companies paying significant income to drivers every month. The company says drivers make around $300 per month, which is at the top of the list income-wise.

Wrapify pays people to “wrap” their car in an advertisement. They cover the cost of installation and pay varies based on market, campaign, size of the wrap, and how much you drive.

Steereo reaches out to your passengers through listening. It is “a music discovery app powered by rideshare.”  Steereo is made specifically for rideshare drivers, and drivers are paid to play new music for their passengers by using the Steereo app.

Artists pay to promote their music through the campaigns, and that is how drivers earn income when using Steereo while driving for rideshare. This way, the artists benefit as well as the drivers.

Rakuten is a cash back app, but drivers can get paid to refer passengers. Using Rakuten is easy and simple, as Rakuten can be used online and in-store. You can sign up for Rakuten and download the app to get your referral code. For every qualifying referral, you’ll receive $25 that you can cash out for actual money, not gift cards.

Read more about Rakuten and download your referrals cards at our Rakuten review here.

Freebird is a cash back app for riders but drivers can actually get paid to refer passengers and the best part is that it’s a great app for passengers.

For every passenger you sign up, you will get $10 in cash and when they use your code, they get 2 free $5 off coupons for their next ride (even if they’re an existing Uber/Lyft rider). Download Freebird today and use promo code “RSG” to enroll and get your bonus sign up credit.

We have reached out to Cargo and will provide more information if and when they respond to us.

Drivers, did you use the Cargo box, and if so, what are you planning to do with your leftover snacks? If you didn’t use Cargo, did you think it was a good idea? Would you install cartop advertising instead?