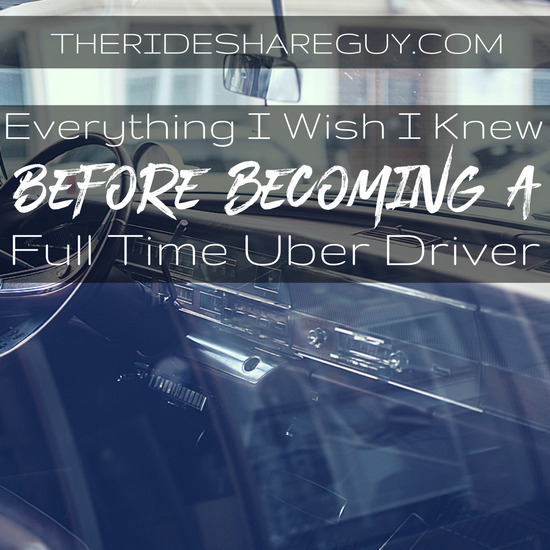 Full Time Uber Driver – Everything I Wish I Knew Before Starting

Harry here.  For a lot of prospective drivers, signing up to drive with Uber can be a big step.  And if you’re looking to do it full time, there’s even more pressure.  So today, senior RSG contributor Christian Perea shares everything he would have done differently if he had a second chance to become a full time rideshare driver again.

In 2014, I quit my job to become a full-time driver for Lyft and Uber. Since then, I’ve spent 2 years fully immersed in the sharing economy, giving over 6,000 rides to passengers in my car across 3 different cities in California. Obviously, a lot has changed in 3 years of Uber driving, but it seems like there are still a lot of questions and confusion associated with “getting started” as a driver.

I never thought becoming a full-time ride-hail driver would be as easy as Uber or Lyft advertised. In fact, I knew it would require all of the tedious bits of running a small business, and I was pretty sure that rates were going down in the long run.

So although I figured it would be tough, I had also always wanted to run my own business. Even if it was small. I really love cars, driving, and meeting strangers so when you combine those three things, you can see why I was so willing to take the leap in 2014.

The Cheapest Car Is Not The Best Car

The first thing I tried to do was get the “cheapest” car available for Uber and Lyft. I figured that prices and pay would drop, and I wanted to have the lowest margins possible to protect myself. So I bought a used 2005 Volkswagen Passat with 135,000 miles for around $4,000. After a few weeks of driving for Uber and Lyft, the car broke. Then it broke again. I was spending more in repairs than I would have spent in a car payment. So I got a new car and lost about $3,000 in repair bills and resale value, all within 2 months of beginning.

Patience, Diligence, and Research Will Get You The Best Car

Related Article: Do You Know How Much Your Rideshare Vehicle Is Really Costing You?

I realize it may be hard to get a good car upfront for a lot of people. Nowadays, there is Xchange Leasing, Express Drive, HyreCar, and other options to get you into a car if you cannot buy one yourself. They are honestly all decent programs, since they fix a lot of the variable costs of owning a car. If I were starting today, I would probably go through Xchange Leasing for three months, drive like crazy, and do whatever was necessary to put a down payment on the best Prius deal I could get.

ONE thing I did get right was meticulously tracking my miles every day. At first I used a notebook and my odometer, then I switched over to QuickBooks Self-Employed since it allowed me to measure my miles, expenses, income, run reports, and create tax estimates all in the same place. It essentially put all of the ugly and boring bits of driving into one centralized place. Now I swipe through expenses on the toilet.

If you suck at being a business and only track one thing (other than your income) it should be the mileage you put on your car. Each mile you drive for an app-based service in 2016 will earn you $0.54 cents in a tax deduction. This is important because most Uber drivers rely on racking up an absurd amount of mileage deductions to avoid paying a ton of money in taxes at the end of the year. See below:

So, if you are going to grind it out on Uber in your Prius, you better track your miles. It prevents overpaying in taxes and creates higher healthcare subsidies. This allows me to make the following claim:

TRACK YOUR MILES OR YOU MAY DIE!

Good Ratings Won’t Get You Anything Special

In the beginning I worried a lot about my rating. Was I doing things right? Did my passengers like me? Did they think I was trying to take the wrong route? My rating dropped .03 points. I must be a terrible person! I better buy some Starbursts and REALLY greet my passengers now!

Ratings mean nothing. If they go too low, you might get deactivated. But you will receive absolutely nothing extra from having a really high rating. You might get a fancy email from Uber or Lyft if you are lucky. But for the most part, you have nothing to gain by having a high rating other than “bragging rights” and self-validation that was generated by the guy who slammed some bottle-shots in the back seat of your car while he wasn’t wearing a seat-belt.

Related Video: Should I worry about my rating as a new Uber driver?

I’m not saying that you shouldn’t care. Be a good person who runs a tight ship and your ratings will take car of themselves. Most drivers will have a 4.7 or above simply by navigating quickly and keeping a clean car. Your passenger doesn’t always want a life-changing conversation. They want to get away and generally feel comfortable getting to the other side of town.

I Would Do Delivery On Fridays/Saturdays

This may seem counter-intuitive to some. Many think that the weekends are when the most “surge” happens. However I have found that weekends are really a hit-or-miss. It is when the part-time drivers (aka 60% of the driver population) have the time to get on the road and flood the market with their cars. This often results in very little surge or few rides altogether. At the same time, the few passengers you get become more drunk and difficult to deal with.

If I were starting over again, I would sign up for a service like DoorDash at the same time that I signed up for Uber/Lyft. That way I would have a second angle to make income if the ride-hail apps are slow for the night. Delivery is also busy during the middle of the day or on weekdays when people order lunch but don’t leave their offices. Generally, delivery is busy when rideshare is slow. The consumer habits are naturally opposite of each other. People staying in order more take-out. People leaving their house for the night order an Uber. Ask yourself each weekend “are people going out or staying-in tonight?”

I Don’t Know If I Would Go “Full-Time” Again

The last 2 and a half years have been pretty exciting for me. However, I don’t think I’d get started as a full-time driver today. If I went back in time to 2014 again, I might still do it, but I would do it much differently. You can still get away with driving full-time in big cities like San Francisco and New York City in 2016. However, if Uber pays less than $1/mile in your market, I would only consider driving part-time for some extra change or to save and pass time. This assumes that you have a relatively low-cost and fuel efficient vehicle.

Full-time drivers must choose to drive during the most profitable hours and rely on things like “peak hours” and “earnings boost” to maximize earnings. This means working very odd and fragmented hours. If you enjoy going out with your friends on the weekends or in the evenings, then you should be prepared to give a lot of that up because now you will be working instead. It also means that when these companies change their pay structure (and they do it often), it will cause a lot of stress on your life.

On top of all that, full-time drivers must sort out their own healthcare, taxes, and generally go through most of the trouble and learning curve involved in being a small business. It may be a good learning experience in that respect, but I imagine there are more profitable ways to do it.

One of the reasons that I write for this site is that it gives me a way to paint a realistic picture of what its like to actually drive and live off the income from deep inside the sharing economy. My point of view comes from behind a steering wheel and not from the marketing team at Rides Inc. With some luck, I can prevent some new drivers (maybe you) from repeating my rookie mistakes and perhaps paint the real picture. If I do, thanks for reading.

Drivers, what’s the one thing you wish you knew before getting started as an Uber driver?  Do you think it makes sense to be a full time rideshare driver today?