How Much is Uber Really Taking From Your Ride?

Today we have our third installment of our “reading your Uber pay statement” series. In our third article on Uber pay, RSG contributor Will Preston tackles the thorny and complicated question of how much Uber really is taking from your ride. If you missed our first two installments, please click to read Understanding Uber’s New Pay Statement and How to Calculate Uber’s Percentage in an Upfront Fare World.

You’ve probably noticed by now that Uber is taking a lot more than 25% commission on some of your rides. When you consider the booking fee, that number goes even higher. But there are also rides where Uber is taking a lot less than 25%. There are even some rides were Uber pays drivers more than what the customer paid them, especially when we talk about UberPOOL rides.

It’s easy to spot the rides where Uber takes a big cut, but I wanted to know what the numbers looked like over a large data set, so I analyzed 255 trips, and the results were surprising. 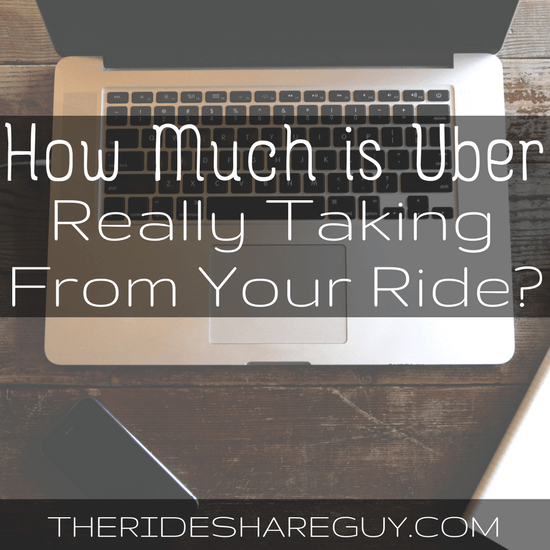 Using the spreadsheet I outlined in my previous article, I analyzed the payment data from 255 rides I gave from May 26 to July 4 this year. For each ride I entered what the rider paid, what I was paid, any additional tolls or fees, and any booking fees. Since the data included the ride type, I was also able to separate UberX rides from UberPOOL rides, allowing me to analyze them separately and together.

The percentage on the actual fare, what some would call Uber’s commission, was the one I was most interested in, as it is the one that many Uber drivers have suggested is now much higher than 25% because of Upfront Pricing. Since Uber can charge the customer anything they want, and we get paid only the per mile and per minute rate, it is the opinion of many that Uber is doing this simply to increase their percentage in the same way that they do with their booking fee.

While I completely agree that Uber’s booking fee increases their overall percentage of every ride – and especially of short rides – this article will focus on the percentage that they take of the actual fare that doesn’t include the booking fee. This is because it is this percentage that used to be a straight 25% and is now anything other than that. So unless I say otherwise, whenever this article is referring to a percentage, I’m referring to the 25% of the “actual fare.”

As I mentioned, there is no question that Uber comes out very far ahead in some rides. Out of 255 rides, Uber took home more than 25% 110 times. Sometimes it was a little bit more than 25%, but sometimes it was as high as 48%.  Some readers will immediately say “Ah hah! I knew it!”  But hold on.

I took a close look at these rides and noticed a trend: most of the rides where Uber took more than 25% were shorter rides where I could’ve taken a different route that would’ve resulted in a higher fare for me and thus a lower percentage for Uber. So it appears that Uber has gone to calculating the upfront fare using a worst-case algorithm based on the longest and most time-consuming route, and most of the time all you have to do to “beat that” is to take the longer route.

I could have chosen to take the longer route, of course, which would garner me a higher percentage of the actual fare. But the shorter the route, the higher the chance that a customer would notice me going what appears to be a non-optimum route. When that happens, you know your rating is going to suffer.

But there were some fares – even some larger fares – where Uber’s upfront price could not be explained by anything other than what Uber’s already told us. Uber has said that they are going to deliberately charge some customers more as long as they can get away with it. It was never anything crazy, like $5 tacked onto what would otherwise have been a $7 ride. It was more like one or two dollars tacked onto a $20 ride. The more rides I looked at, the more instances I saw of this.

33 times (roughly 15% of my rides) Uber paid me more than what the customer paid them! That can be explained by two possibilities. When the loss is a few percentage points of the ride’s cost, this can be explained by Uber incorrectly estimating the cost of the ride. Sometimes there’s an accident and we have to take a longer route. Other times the customer asks me to do a stopover on the way to their destination. That may take us out of the way and will certainly add time to the route. If it’s not crazy enough to cause a recalculation of their fare, it could cause Uber to lose money.

The other thing that can cause their percentage to be quite low includes things like marketing promotions and free ride coupons. I still get paid but Uber gets less than normal. An example of that is a customer who pays $4.99 for five rides, no matter their length.  The “rider pays” amount is going to say $4.99 regardless of the length of your ride.

Another might be a rider that is given a free ride.  I had one of those in my list of rides, where Rider Pays showed $0.  But trying to figure out which of the rides are such promotions is kind of impossible.  But even if such rides are part of the equation, I would still argue that the numbers should be included.  It’s what Uber got paid, regardless of the reason.

Here’s an example of a ride Harry took where he tipped the driver $2 but used a free ride code.  Tips get charged to your credit card even if you have a free ride so the rider paid amount was still $2. On average, Uber is making way less than 25% commission

When I add all 255 actual fares together, I get $2794.39.  For that, I was paid $2307.98. That means that Uber received only 17.41% of the actual fares the customer paid.  So it doesn’t appear that their recent pricing changes were intended to bump their percentage above 25%.  Some of you might say that if that was their plan, they just haven’t been successful at it yet.

When I wrote the last article, I asked people to run their numbers using that spreadsheet and send them to me. I received data for about 250 rides from three different drivers in three different markets. Their overall percentages were very close to mine.  One was 17%, and the other was 21%.  But the 21% driver was UberX only, which is the same as what I found in my data.  (Read more about that below.)

On average, Uber is making 30% effective commission on every ride

When you add the booking fee into the formula, their commission goes from 17 to 30%. So if the average Upfront Price paid by a passenger is $10, Uber takes on average $3 from the fare.

Uber made a higher percentage on UberX

My data included 33 UberPOOL rides and 222 UberX rides. Uber’s percentage on UberX comes out to 21.11%, much closer to the 25% we expected. This is probably the number that we should watch over time, as adding in the UberPOOL numbers muddies the waters. UberPOOL is a completely different ball of wax and loses money for different reasons. But still I think it’s interesting to see that even when we just look at UberX, Uber’s percentage is still lower than 25%.

Uber is losing money on UberPOOL

I feel compelled to remind you that I’m the guy who doesn’t hate UberPOOL, and accepts POOL rides as long as things aren’t surging. Also, if I accept a POOL ride, I always take any additional rides that that ride offers. Even so, there are enough times where Uber doesn’t get a match and therefore loses money.

This is also interesting, because a lot of people say Uber is making a killing on UberPOOL, but it actually appears to be the opposite, at least in my case from the 33 rides in six weeks.

You can verify all the numbers we used here and by now, my articles should show that we are all about using data to prove our points.

If you’d like to argue your numbers are different, I’d like to request that you use the same spreadsheet and fill in at least 100 rides.  It took Harry and me a lot of back and forth to come up with these formulas, as there are some complicated issues here.  So if you just respond with “my numbers say 45%,” I really don’t know how to respond to that because I didn’t see the math behind your number.

This could well be just the start of Uber’s plan and maybe their numbers will change over time.  A year from now that 17% could become 30% but at least this gives us a baseline.  I’ll keep an eye on things though and report as necessary.