Is Uber Stealing Tips From Me?

Since Uber launched tipping, we’ve gotten several e-mails and reports from drivers claiming that Uber is stealing tips.  Some drivers emailed me saying their app glitched and the tip disappeared, some told me their passengers tipped them through the app but the driver never received it, and some just don’t trust Uber.

They’re all valid questions and concerns though, so we asked senior RSG contributor Will Preston to take a look at whether or not Uber is stealing tips from drivers.

There are several stories in the Uber forums of drivers that feel that Uber is “stealing” their tips. While anything is possible, I decided to do an experiment to really test and see if Uber is actually stealing tips. If true, I would catch Uber in the act almost immediately – or not. Here’s what I did and how it turned out. 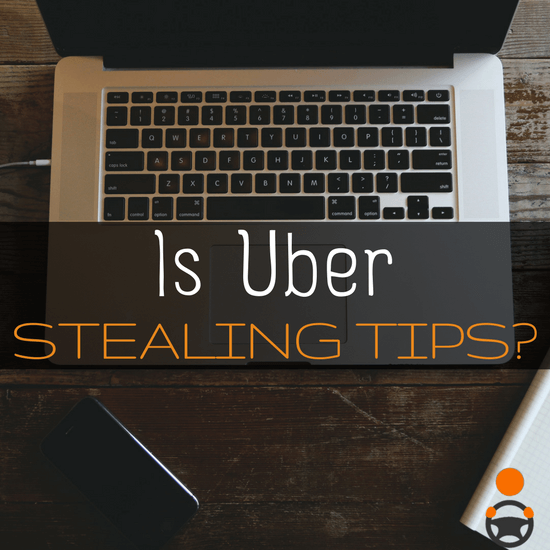 I drove for two nights, and as long as I got a decent feeling from a rider, I asked them if they could participate in some research I’m doing on the in-app tipping system. I offered to give them $1 in cash in exchange for watching them tip me $1 in the app. Almost everyone who I offered this experiment to agreed to participate.

Most passengers tipped me at least $1, and most passengers actually said I could keep the $1, or they put it in my tip box when we were done. I did this for about 20 rides, and all of the tips I expected to show up showed up.

There was one near-exception, but there was a side issue with that one. So my “sting” resulted in no proof that Uber is doing anything untoward with the in-app tips, but it did reveal a number of other things.

I know that some will say that this isn’t statistically significant, and that would be correct. But honestly it was a lot of work remembering to do this every time, then inconveniencing the passenger by asking them to stay an extra minute to tip me while I watch them. I will also say that I looked at all the threads about this on uberpeople.net, and I saw no one with actual proof of anything other than a tip being delayed. For some reason, it may take a day or two for a tip to show up.

Even though I was sitting there with a dollar in my hand that they could have for tipping me $1, many had a funny look on their face when I asked them to tip me. I assure you, passenger, I’m not doing anything weird here.

They were most weirded out by the fact that I needed to watch them do it. I did this because I needed to be sure they actually followed the process to its conclusion. I wasn’t going to accept any “sure, we’ll tip you” statements, as I know they’re mostly bogus.

Actually, I’ve found that the more noise people make about how they’re going to tip you in the app, the less likely it is they actually do it.

Which leads me to my “exception.”  One of the passengers agreed to the experiment but had already stepped out of the car went I mentioned that I needed to see the screen as he did it. I could see he rated me, and it looked like he tipped me, but I never saw the “completed” screen. Then that tip never showed up. Since all the other tips showed up, I’m thinking he never pressed the Done button, then closed his app.  Bye, bye tip. And he took my $1, too!

Related article: How to make extra hundreds of dollars driving for Uber

Uber Support Does Not Help

The “missing tip” gave me an opportunity to see how Uber support would help in this scenario.  Two days later I created a ticket for that fare, and selected “I had another issue with my fare.”  I explained that I saw the passenger tip me $1, but it never showed up. Like I said, I saw him press the $1 button. Uber replied with this totally useless message, showing they never actually read my ticket. “Any cash gratuity offered by a rider is voluntary and up to the discretion of the rider. If a rider wishes to tip you, please feel free to accept. Where available, you may choose to opt in to accept in-app tips from your riders. Uber doesn’t take a service fee from tips, so the total tip amount will be added to your earnings.”

I still don’t think this is evidence that Uber is “stealing” anything. The passenger in question seemed a little clueless, and probably never pressed Done. I bet I didn’t even get his five star rating.

Most People Don’t Know How to Tip

I know it will come as no great surprise to other drivers, but most passengers had no idea how to tip in the app. Once they agreed to the experiment, the next question was “how do I tip you in the app?” As discussed in the previous article, this is because Uber hides its tipping system behind its rating system.  Since most passengers don’t rate you, they’ll never even see the tipping screen. It’s hard to learn about a feature you never see.

Uber Makes it Difficult to Tip

In two out of the twenty rides, the screen showed something other than what you’d expect at the end of a ride. In one ride, the “rate your driver” screen still showed their driver from the previous ride, and they had to rate her before they could rate me — before they could tip me.

I think this is much more likely than Uber stealing tips. The screen is occasionally just not what you’d expect to see, and the customer never even sees the ability to rate your or tip you. Couple that with passengers saying they’re going to tip you when they have no intention of doing so, and you have the feeling that Uber is stealing tips.

Uber’s Priority is Uber, Not You or Your Tip

This, I think, is the crux of the issue. To see what I mean, let’s take a look at some screen shots from a Lyft ride I took when researching this article. As soon as the ride is over, my phone dings and I am presented a very big screen with the smiling face of my driver, right next to what would I like to tip my driver.

The big picture humanizes and personalizes the driver, and it makes me think “I should tip this guy!” I mean, come on!  Who wouldn’t want to tip that smiling face! It fills the screen and puts the tip right up front. Then once you tip (or don’t) tip your driver, then you see the rating screen. Compare this to how Uber does it.  First, my phone does not ding when the ride’s over. The first screen I saw after my ride was over was an ad for the Uber credit card, with the rest of the screen filled with how to request my next Uber ride. This is Uber’s priority: make more money for Uber. It’s not to get more ratings for you, and it sure isn’t to get more tips for you.  We want to make sure the passenger saw an ad for the credit card, and we want to make sure that if even they don’t rate you and then open the app, the biggest part of the screen will be how to select their next Uber.  We wouldn’t want to confuse the passenger with a rating or tip screen before they ask for their next Uber ride.

The ad did go away after a few seconds, but this screen didn’t look too much different.  Notice that the rating section of the screen is a little tiny section at the bottom. There is no big picture of the driver to help humanize them, there is a little tiny picture that’s virtually unrecognizable.

Also, the rating screen is first, not second. Finally, the whole rating dialogue box is small and unobtrusive, not right in your face the way Lyft’s tip screen is. Once you ignore the credit card ad and rate your driver, then you’re presented with the tipping screen. It’s still a tiny picture and they add the “compliment” nonsense. Your tip is last on the Uber priority totem pole. First priority is getting another Uber ride out of this customer. Second is getting them to sign up for a credit card. Third is making sure you get graded. The last thing they’ve built into the system is to get you a tip. No wonder I get twice as many tips on Lyft as I do on Uber!

Not Theft, but Robbery Nonetheless

By having a confusing tipping system hidden behind an almost-hidden rating system, Uber is certainly robbing you of money you could otherwise be making. I can’t find any evidence that they’re taking any valid tips that passengers made, but they certainly don’t seem to be prioritizing tipping in the app.

Readers, have you noticed it’s difficult for passengers to tip on the Uber app? Have passengers ever mentioned this to you? And if you do have proof that Uber is stealing tips, contact us and send us screenshots or other proof.