Will These New Features Make Driving for Uber and Lyft Better?

Uber and Lyft are competing to make their apps and driver efficiency better, but will these changes really improve the driver experience? Today, senior RSG contributor Christian Perea outlines potential upcoming changes to our Uber and Lyft driver apps – some that will make a big difference to drivers.

We’ve seen competition heating up between Uber and Lyft ever since Uber started to put the heat on Lyft with their “180 Days of Change”. We’ve compiled a list and roundup of all the leaked screenshots, rumors, and tests that are going on for drivers that haven’t even launched yet. Whatever happens, hopefully we will get some more money out of it!

Uber and Lyft are almost always testing features among different drivers throughout different markets. Some of these features make it out to the public while some are quickly put back in a box and never heard from again. Right now though, both are testing a lot of interesting changes to their apps that I think have a strong chance of being rolled out to everyone.

All of these are part of a big push right now to make the app better for drivers. 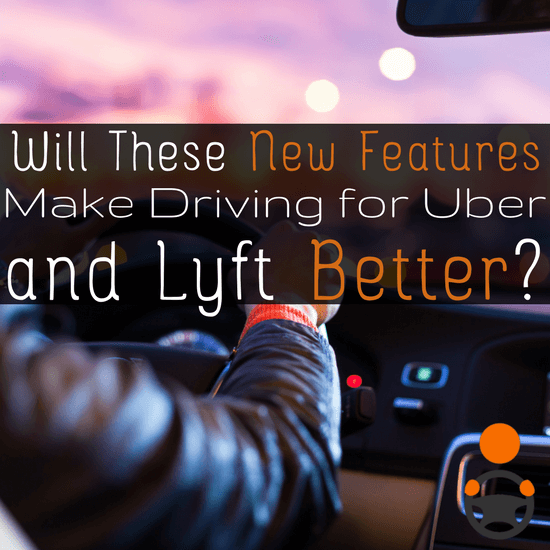 Below is everything I have come across over the last two months that has not yet been rolled out to all drivers. Some tests are for Uber while some are for Lyft. There is certainly a lot going on! According to this Reddit post, Uber is testing a feature in Orlando that will notify you if the incoming trip is likely to last longer than an hour. It won’t reveal the final destination of the trip upfront, but it will give the driver a general heads up that a trip is going to take a while.

I strongly suspect we will see this feature as part of Uber’s 180 Days of Change although I’m not exactly sure when it will be deployed. Ideally I would like to get a notification when a trip is likely to be more than 45 minutes, or take me over bridges or other areas of congestion.

It will also be interesting how this plays out at airports because I know a lot of drivers are really hoping for a long ride from the airport.

“Warm” Maps: Another Blow to Surge and PrimeTime

Uber and Lyft are both testing “warm” maps. They work by displaying areas in the app where rides are most likely to happen based on historical ride data. Basically they are surge maps without any surge. From what I have seen in forums, most drivers do not like them, which probably means they’ll get rolled out to the rest of us soon. Uber displays them as little grey zones while Lyft just puts a pin on their map and gives the driver the option to go hangout there. Companies like FarePilot, and Rydar are actually already doing this with their own apps and machine learning.

This new pay scheme makes UberPOOL trips payout the same rate as an UberX trip. It also adds a small amount of money ($0.56) for every passenger that a driver picks up. Meaning that we can finally earn (a little bit) more for doing shared rides.

The testing began with a group of drivers in Los Angeles around mid July. When it comes to something like this, Uber is probably going to take their time making sure that they still make their money. So I expect longer testing. Lyft is already paying drivers the same for Lyft Line as they do for Lyft Classic. Hopefully Uber will follow suit.

This is actually just the way it should have always been. Getting paid less for doing shared rides is an insult to our time. If I am earning the same or more for shared rides, then I am much more open to doing them. However, I’m still not thrilled. Lyft is testing a “Destination on Accept” feature. Basically it works by showing drivers the destination of each of their passengers on the accept screen. Right now, it only works If you maintain a 90% acceptance rate on the Lyft app. I expect that Lyft will test this for a little while longer though because they will want to make sure it can’t be abused by some drivers before rolling it out to everyone.

Although a 90% Acceptance Rate can be high to upkeep, I think you can still use declining a ride in the right circumstance, like when there is a ton of PrimeTime and you get a request that is only going a few blocks. I think we have all wanted to see where our passengers are going before accepting a ride for a while. So hopefully this gets past testing and rolls out to everyone.

Some drivers have noted concerns that it will result in “cherry-picking” rides but I don’t think it will because doing so will lower their Acceptance Rate and disqualify them from any Power Driver Bonus. Further, many of those drivers are already cherry-picking rides by sending text messages to their riders asking for where they are going.

6 Destination Filters (Instead of 2)

Both companies are testing this right now. Uber’s Destination filter works pretty well in my experience so I definitely welcome it. I don’t think this is a huge change, but it will definitely provide more options to those drivers who have learned how to use Destination Filters strategically.

Related: How to Use Destination Filters to Increase Your Profits Alison Griswold over at Quartz wrote a story about this feature being tested and it’s also been appearing throughout various driver boards and Facebook groups. The tested feature allows drivers to select large areas of their city/market in which they want to drop-off passengers – while avoiding areas outside of where they want to drive. I haven’t seen any screenshots of this feature in action yet, but I think it has the potential to be a big deal.

For example, it may add a new layer of strategy to driving large events or concerts. Would you want to filter out nearby neighborhoods if surge was 4.8X? To be honest, I don’t really see a point in having a Destination Filter if Uber rolls this out because this would theoretically provide much more choice in choosing where you want to drive and drop people off.

Right now Uber driver ratings are averaged across 500 rides while Lyft averages their driver ratings across 100 rides. My ratings have always been lower on Uber for some reason, so I think Uber is trying this out to see if it boosts the ratings for most drivers.

I personally prefer to have it averaged out over 100 rides since it allows me to get my bad ratings thrown out faster. Although to be frank, I don’t really care about my rating.

What’s With All The Change?

I’ve long talked about how Uber and Lyft have a driver retention problem. If both companies want to increase their driver retention, then they have few options: pay them more (and raise prices in the process) or make the app better.

I think a lot of these changes are really focused on the latter. Making the app easier to use and providing drivers with a lot of the features that they have been requesting for a long time.  But notice that a lot of these features also make their dispatch of drivers more efficient. These changes basically allow both companies to use fewer drivers more efficiently by nudging them into certain areas, stacking rides on top of each other, promoting shared ride services, etc. It’s clear that they are going to do everything they can to make the apps better before raising rates.

I still think the systemic problem with rideshare in general is that pay level for drivers is far too low. The companies may also suspect this as well but they will certainly try this strategy first before raising prices and losing a lot of their riders. So the big theme to all of this is whether these app improvements will increase driver pay enough in the long run to keep us around.

Drivers, what do you think of these proposed changes, and have you seen any of these pilot tests in your city? Leave your comment and screenshot below!